The Reality of Rape and My Disgust of the Disbelievers 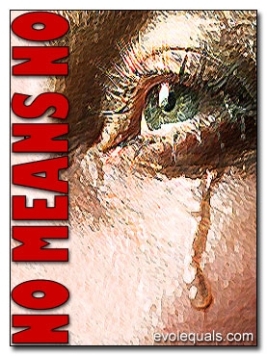 Just like any other morning I was reviewing links and stories on Facebook, and checking in on a page I co-own and admin Support All Gay Rights. I came across one post in particular in my newsfeed that fueled me.

The evening before I was on a Facebook page that offered an advice section, members post questions anonymously, and others comment their thoughts and opinions. This one involved a woman who is in a same-sex relationship that was raped by her girlfriend. This topic hits home for me, so I moved on, as it was nearing my bedtime and I didn’t care to fall asleep thinking about such things.

The next morning I went back to the same posting, and what was now there outraged me! There were near two hundred comments made to this woman, and dozens that read “LMAO“, “a woman can’t rape another woman”, “you asked for it”, “it was role play, don’t be a drama queen”.
My heart began to race with anger and utter disbelief at the very words I’m reading. Instantly I’m feeling the hurt and embarrasment this victim surely is feeling!!
So I am ready to discuss this topic- RAPE, in a way I never have before. Unless people understand what it is, it will continue, and its damage will continue to feed on its victim from insensitive strangers long after the event itself took place.

Rape is not a form of sex.  It is a form of violence.  It takes a part of the person’s soul by letting them know they are alone, powerless and that their most intimate being is not theirs to control.

Rape and sexual assault occur in all sexes, to all types of people. The assertion that sparked me into writing this blog, that a woman can’t be raped by another woman, is so untrue. This woman was forced to have sex, after saying and pleading NO.

Her cries were ignored, her tears, her words, and a woman  had sex with her, against her will.  Never mind that this is a couple and they live together. Rape is Rape, and what I described before took place.  There’s no wrapping it up with a pretty little bow, and saying “well she’s your girlfriend, so she can’t have raped you”. Woman are raped by their husbands, by other women, men raped by women, Transgender persons are ridiculed and raped. When a person says “NO”, they mean “NO”! Any sexual act forced after that has been said, is rape. Let’s look at some examples that have made headlines and how the act of rape or assault is belittled.

Recently a story made headlines (ThinkProgress) where a victim had been at a local bar where she was sexually assaulted by Arizona Police Officer, Robb Gary Evans. He was later convicted of Sexual Abuse. Arizona trial Judge Jacqueline Hatch told a female victim “If you wouldn’t have been there that night, none of this would have happened to you,”.  In court, Judge Hatch said to the victim “I hope you look at what you’ve been through and try to take something positive out of it,” and went on further adding, “When you blame others, you give up your power to change,”.
In my opinion, Judge Hatch is adding to the problem of what rape and sexual assault is, that she underminded this victim, giving the message that the victim played a role of fault in this. I’m not OK with that message, and neither should you be.

Too often I’ve heard and read situations where parents are told by others that their lesbian daughter should be forced to have sex with a male until they’re straight. I’m baffled that such a thought, let alone the words that come out of peoples mouths! That tidbit came from Radio Personality Dominic Deiter, out of Cleveland Ohio. He stated to a father that suspected his daughter was gay, “You should get one of your friends to screw your daughter straight.” Hello!! What is wrong with this? This radio DJ just advocated publicly on air, the rape of an innocent girl. Are you outraged now? (Courtesy of http://www.democraticunderground.com/1014109184)

Rape occurs every single day, in our towns, neighborhoods, all over the world, and yes, even within our own families.

So why do I care?

When I was 15, I went to spend a summer in California with my Aunt and Uncle, babysitting my niece and nephew and making a few bucks.  My uncle worked at a gym and racquetball court, later was a Strength and Conditioning coach for a well known University football team, and a consultant for the Olympics. During my summer there, I confided in my trusted Uncle (he was adored by all of us nieces and nephews) that I liked girls and not boys. Over time he took me out on outings to learn to drive, a manual trans Pinto. How classy. I looked up to him, he was cool, successful and my Uncle. I trusted him. Until one day the kids and I were washing the car in the driveway, and my Uncle took me to his bedroom, and forced me to have sex with him. I tried fighting him off, I had no voice. I mean it, I didn’t utter a word, other than my sobs. After is was over, he told me, “You’re not a lesbian, I just proved that. If you tell anyone in our family, you will be the black sheep“. For years I’ve carried that day with me.

My rapist took my virginity, my innocence, and my voice.

He made me to feel at fault, he was a 33 year old man and I was a 15 year old girl, his niece. He raped me. To add insult to injury, when I did in fact tell my family, they didn’t believe me. Later I confronted my Uncle, in email, he owned up to it, telling me “God forgave him“, I sent that very email to my family as proof. To this day, for reasons beyond me, my family still is in contact with him. I haven’t seen him in 20 years, nor do I ever plan to.

This is far from easy for me to share with my readers, I felt compelled to, because I didn’t have anyone in my corner.  I’m sure that a few members of my family will be enraged that I’ve even shared this with you. It’s not their story to be told, it’s MY story, it happened to me, not them.

When people demean, belittle or dismiss an act of rape, they are putting the fault on the victim, it compounds the act of violence a victim has endured. That is as agonizing as the assault itself.

Rape happens. Rape is real. It happened to me.

Rape often goes unreported. There is a mentality  of disbelief, misguided as it is, it’s still happening. Stop blaming the victim.  Start punishing the rapists. Be part of the solution and not part of the problem.
At the very least, you have the power to be kind, caring, compassionate. Words can hurt or they can help the healing start.

A single gay dad who cares. His story can be read here: http://www.imagaysingleparent.com/2013/02/02/rob/ and here: http://www.huffingtonpost.com/2014/01/31/rob-watson-gay-family_n_4689661.html
View all posts by robw77 →
This entry was posted in Civil Rights, Family, Living, Prejudice, US Politics and tagged disbelievers, rape, same sex domestic violence, victim's rights. Bookmark the permalink.