Did You Hear the One About the Homophobes Who Wanted to Adopt Out Their 16 Year Old Lesbian Daughter? 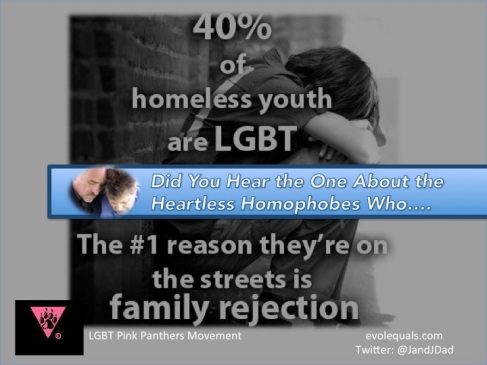 Jokes are supposed to be funny.  They always start with a set up and then build to a crescendo where the plot twists and the listener bursts out laughing.    Last week a “joke” went viral, but no one was left laughing.

The “joke” was a piece titled “PARENTS PUT 16 YEAR OLD DAUGHTER UP FOR ADOPTION AFTER LEARNING SHE IS GAY”.  It came from a site called “The Memoirs of DEACON Tyson Bowers III”, and had previous iterations on the Daily Bleach and Christwire.  The site it came from had other “credible” material such as KENTUCKY MAN SUES MOTHER FOR NOT ABORTING HIM,  DANGERS OF PRIDE WEEK,  STUDY: LESBIANS MORE LIKELY TO EAT FISH, AFRICAN AMERICAN SCIENTIST INVENT SYNTHETIC WATERMELON and GAYS BUILDING SECRET PENILE SHAPED RESORT ISLAND.

The piece was written as humor…satire… but none of the 72,000 who shared it took it that way.  They believed it to be real.

Who could blame them?  The article described the mindset of a homophobic couple from “Southern Carolina” who upon learning their daughter was “gay”, sought to put her up for adoption.  Those who believed the story did so because even though it was fake, the mindset itself is painfully and horrifically real.

The story sped through Facebook and pages posted it, in most cases temporarily, only to take it down again with the apology that they had fallen for the hoax.

The most heart wrenching thing to observe were the sweet souls who were willing to step up to help.  Numerous people sought more information because they actively were looking to adopt the abandoned teen in question.

Here is some news for them, and for those of you who cared about the 16 year old girl in the fake story.  She exists.  The story was bogus, the situation was a lie, but she is the truth.  She is 16 and 15 and 14.  She is male, she is female and she is transgender.  Her parents did not try to adopt her out… they simply kicked her out, and slammed the door behind her.  “She” is our homeless lgbt youth.  She not only exists, she makes up to 40% of the total of all homeless teens, even though lgbt teens make up only 3% of the total population.

Writer Cathy Kristofferson researched and wrote an important piece in which she paints an accurate and urgent portrait of the LGBT homeless teen.  Of the disproportionate rate she states, “Simple.  Youth who come out to their parents are rejected by those parents at a rate of 50%, with 26% immediately thrown out of the house to become instantly homeless and many following soon after as a result of the physical and verbal abuse that ensues after their declaration.  Empowered by the gains in equality and acceptance with the heightened visibility the adult gay community has welcomed of late, youth are emboldened to come out at ever-younger ages while still reliant on parents who are a flip of the coin away from rejecting them.  Simple factors of 4 tell the story of parental rejection and its effect on queer youth homelessness:

Youth homelessness is bad enough on its own but being queer further compounds the difficulties.  Devastating statistics like 62% of queer homeless youth attempt suicide only begin to tell the story of the additional hardship endured when compared with their heterosexual counterparts.  Queer youth experiencing homelessness are:

So, yes.  There was an article passed around the other day, and thousands were rightly outraged and cared.  The article was a fraud, bur your feelings and mine were not.  We need to not focus on the tomfoolery of the internet and focus instead on the WHY, the reason behind our feelings.

The WHY is that there are real kids out there that need not only our indignation, but our action.  Last Christmas, I suggested reaching out to them in the spirit of the season.  Now I am suggesting it in the spirit of what is right.

If you wanted to adopt the 16 year old in the story, find the real her and adopt her.  If you wanted to send money, start a program, get involved, please do it.  If you felt passion around it, please channel that passion into action.

If we don’t, then the unreal story becomes real.  It becomes an allegory for the progressive community who chose to adopt out its youth in need.  We are better than that.  Let’s not have the next viral story be ours.

21 Responses to Did You Hear the One About the Homophobes Who Wanted to Adopt Out Their 16 Year Old Lesbian Daughter?