This is a blog by our Guest Blogger, Brianna Dugan. 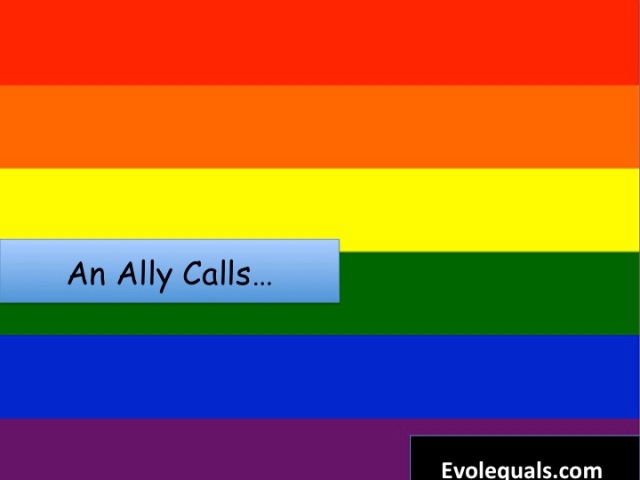 This morning I had a conversation with a very special and important person in my life- someone whom I think the world of and feel that my life has been changed because of. I always wanted to be a writer, and I believe that writing is a deep and sincere way of expressing one’s self and ideas of the world in which we are living. For a while I have been writing about the LGBT community and have been silent, due to my constant question of whether I should voice my feelings and opinions simply because I am heterosexual. I felt that I could not relate personally to any LGBT phenomena such as “coming out”, experiencing the homophobia itself, and growing up as a person who “was.”

Today I have been reminded that I am just as much involved in the LGBT movement as any LGBT person who is living in it and has lived through it. I had forgotten, that although I may not be LGBT, my friends and family are, and that is why homophobia and this long on going struggle for equality affects ME. As was pointed out to me today, “think of the breast cancer awareness walk. Not all people who walk for breast cancer have the disease, although they ARE affected by it.” Hearing about homophobia and anti-gay attacks hit home when I think of the people I know and love, whom this could happen to, if one person feels it their right to physically and emotionally cast their hate.

This reality is unacceptable and angers me, and it is with this anger, I write this call to action, and fully realize that my position to comment on the movement is validated.

I think back to the great struggles that our LGBT friends and family had made in the late sixties and seventies, and reflect upon where we are today, seeing that there are still national inequalities and anti –gay attacks with no consequences. On May 22, 2013, I looked back and remembered a great hero and LGBT icon named Harvey Milk. After searching through articles and blogs looking for a link to the past, I discovered a blog by screenwriter, Dustin Lance Black. Reading Lance Black’s article, “What Would Harvey Milk Think If He Were Alive Today,” I jumped up from my computer clapping and yelling “Finally! ” Finally someone has made a call for a return to Harvey Milk’s political philosophy. A philosophy that I believe is the key to achieving full and equal equality.

Upon finishing Black’s article, I was left thinking of a comment he made in relation to Harvey Milk: “What has happened to the coalitions we started building?” I support Lance Black’s recent call for a return to “Milk philosophies,” and strongly urge the LGBT community to heed this message. The coalitions Black is referring to I believe are non existent. I think if Harvey Milk were alive today, he would be ecstatic with the progress that has been made, but disappointed that as a community we accept fractional equality, agree to compromise, and are yet to be united nationally. If we can learn anything from Harvey Milk, it is that in all our differences, we are a same and equal people, all fighting for one outcome- full equality under the law.

Harvey Milk would never accept partial equality, and would not be satisfied with dismal compromises, and neither should the LGBT community. He would not ask for rights; he would demand them. The LGBT community must learn to say in loud, commanding voices “NO.” “No” to partial equality, “No” to compromise, “No” to delays, “No” to workplace discrimination. The LGBT community as a nation of unified people must say “Enough!” and start publically demanding their rights and have their voices heard. I for one, am going to act upon Harvey’s message, and I am going to make my voice heard to all people. Gay people must be out and proud, never apologizing for who they are, and all the allies out there must come out in support so that their friends and family know that they know an ally. Gay people and allies must be visible, and must come together as a unified people.

The one true way to receive equality is to include all minorities: Gays, Blacks, Asians, women, seniors, homeless, and disabled. All people who were ever called “less than” and had to fight to be seen as equals need to realize that they all are apart of one movement. The people are the movement, the movement is for equality, and equality pertains to every human being regardless of sexual identity, orientation, race, religion, and social status. Equality is something that affects all people and is something a lot of people are living without. We have the power to change this, however we must be visible, loud, demanding, and persistent.

As a community, we must all remember Harvey Milk’s philosophy and realize that we must do more than use social media to fight this battle for rights. We must be online organizing, out in the streets protesting, calling representatives, writing letters, going door to door, marching right up to city hall, and rallying outside federal buildings. We must do all of it. There must be a national united community present and visible to everyone. It is crucial that all people of “less than” histories realize that we are ONE, and fight to never fall victim again to compromises and partial equities.

On May 23, 2013, The LGBT community received a slap in the face from the Boy Scouts of America- an organization that lifted a ban on gay youth admittance, but refused gay adult scout leaders. This blatant act of bigotry and recurrent display of discrimination is yet another reminder of partial equality that is meaningless. Partial equality is not equality. No one receives equal rights with the mind set “ you can this, just not that.” I am disappointed that a compromise as such was made, and hope that the LGBT community will see that BSA has not done an act of good, but instead made a mockery of the entire movement.

It is my hope that the LGBT community will be angered, and will reemerge as a fighting, and powerful force to be reckoned with. I hope that the person reading this will realize that they have a place and position in this movement, and I hope they understand that they are needed. All voices are assets to win this fight, and mine will definitely be one of the strongest.  As Harvey Milk once said, “the people united will never be defeated.” Harvey Milk showed us what to do, and paved the way for us to follow, and I think it is about time we start listening and doing. If we want to be a fully equal people, we need to start acting like it.

1 Response to An Ally Calls