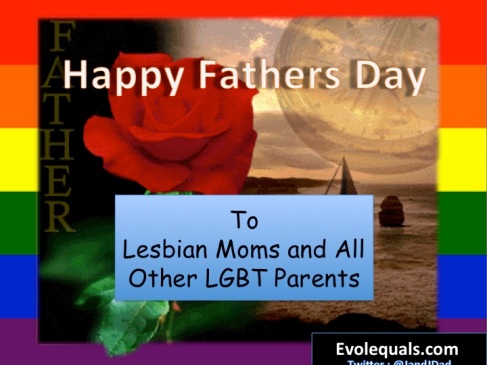 Recently, authorJennifer Finney Boylancommented about her transgender experience: “After all these years, my own identity has wound up less altered than I had expected. It should not have been a surprise, perhaps, but the most shocking revelation after ten years in the female sex is that mostly I am the same person I always was, gender notwithstanding.”

Even without being transgender, I relate greatly to Boylan’s comment, especially when it comes to being in a male body during the holiday season of Mother’s Day and Father’s Day. While I identify with the physical description of being a “gay dad,” the truth is, I am actually a parent who mothers and fathers. I do not make an automatic assumption on characteristics or abilities based on the gender of the parent. I know there are others, even in the LGBT community, who see things differently. They see two holidays, one that honors physically female gendered parents and one that honors physically male gendered parents. This viewpoint was dramatized in a Normal Family episode when one of the fictional gay dads has a hissy fit over being perceived as the “mommy.”

In the book An Anthropology of Mothering, editors Michelle Walks and Naomi McPherson state, “Through the consideration of the experiences of grandmothers, au pairs, biological and adoptive mothers, mothers of soldiers, mothers of children with autism, mothers in the corrections system, among others, it becomes clear that human mothering is neither practiced nor experienced the same the world over – indeed, even a single definition of what ‘mothering’ is cannot be formed by the contributors of this anthology. Instead, while ideas of ‘good’ mothering exist in every culture, the effects of colonialism and migration, as well as different understandings of and relationships to food, religion, and government play prominent among many other factors, including age, relationship status, and sexuality of mothers themselves, to affect what is understood as ‘good’ versus ‘bad’ mothering.”

I would add gender to that list. As a parent, I am, as Boylan describes, “the person I am” and my parenting qualities are really not genderfied. I seek to be the full-range parent to the best of my ability on all fronts.

In terms of being an ideal “father”, Julian Marcus suggests these twelve qualities make up that person:

1-  Is a good disciplinarian

2- Allows his or her kids to make some mistakes

4- Teaches his or her children to appreciate things

6- Spends quality time with his or her children

9- Challenges his or her kids

10- Teaches his or her children lessons

11- Protects his for her family at all costs

These are qualities of every lesbian, gay or single parent I know.  As an LGBT parent, I felt disenfranchised this morning when I got a cheery email from an LGBT advocacy group I support. I want to make one point clear—the disenfranchisement does not bother me for myself. I am confident in who I am, and my kids are phenomenal with the love they express toward me. I am a lucky guy, among the luckiest on earth.

My concern here is for my kids and others like them in gay-dad-only, or lesbian-only, -led families. They are the ones left out in the planning, conversations, and excitement over one of these two holidays. They are perceived as the “oh, you don’t have one, and never had one” crowd. They get the message that their family lacks something. It is not true. Most are mothered and fathered, as nurtured and adored as any other kids. They need to be appropriately included in the celebration of all that is motherhood, and in the subsequent celebration of all that is fatherhood, and the people who do each.

The email I received stated “In preparation and celebration, we and the makers of [Corporate Sponsor[ are excited to announce the release of Mother’s Day e-cards that are inclusive of lesbian, bisexual, and transgender moms.” This campaign struck me as odd on two levels, the first being the exclusion of male mom figures in the gay community, and the marginalization of a set of moms who are likely to be recognized anyway, by calling them out by their orientations. I wrote a quick note pointing out my concerns and received a pleasant but confusing note in return, “Thanks for your feedback. We have a similar e-card campaign coming up for Father’s Day as well, since these are two widely acknowledged holidays where LGBT families sometimes don’t feel included. You are welcome to use cards from either’s campaign (Mother’s Day or Father’s Day) and to share them with customized messages to reflect your own family.”

I wrote back: “I think you have some good-hearted intentions, but are missing the mark significantly. You are correct that these are widely acknowledged holidays where LGBT families don’t feel included; however, in my opinion, your campaign intensifies the exclusion. I do not believe my bisexual and lesbian mom friends feel excluded on Mother’s Day; they are moms who rightly get the same recognitions that heterosexual moms do. The families who feel excluded are the ones like mine where there is no female parent, and my kids are guided in school to make a gift for some more distant female relative instead of the person they actually turn to for nurturing, love, and warmth. We have a community where the concepts of mothering and fathering are larger than physical gender characteristics. Your campaign, unfortunately, doesn’t diversify the status quo, it magnifies it, and seems to further marginalize women who already qualify for recognition on the holiday. Speaking from this gay-dad perspective, on Father’s Day, I really do not want a “gay dad” card. I am not ashamed of being a gay dad, but I am proud on Father’s Day just to be a father among all fathers, even ones who are biologically female. I would be thrilled to see you come out, for that day, with cards celebrating my lesbian sisters who bring strength, power, and fatherhood into their families, and recognize them on that day as well.”

I don’t have to explain any of this to my kids. They already get it. Recently, my son Jason was running from his brother and into my arms cheerfully screaming “Mommmmmmmmmy!” I looked at him quizzically and asked, “who are you calling for there, Boo?” He looked at me in a matter-of-fact way, “No one. That is not what that means.”

“It means that I need help right away,” he explained.

“You,” he said. And then he planted a big kiss on my cheek before running off.

On Mother’s Day mornings, my other son, Jesse, leads the way in bringing me breakfast in bed with flowers. He got the idea on his own three years ago at the age of seven. “You do everything their mothers do,” he explained at the time. “This is your day, too.”

Dear Parent of the Heart and Soul:

“Love is the only freedom in the world because it so elevates the spirit that the laws of humanity and the phenomena of nature do not alter its course.” Kahlil Gibran

You personify a love that overcomes all obstacles, biases, and inequities.

We enter the season that honors the two aspects of your parenting and the love that you bestow to the world. That love becomes realized when you give yourself to your children.

You are mothering, in the traditionally understood sense, when you nourish, nurture, and shower affection. You sow the seeds of confidence, vision, and creativity.

You are fathering, in the traditionally understood sense, when you protect, guide with principle, instill values, and inspire. You sow the seeds of morality, leadership, and personal power.

In the real sense you are mother and father integrated into a seamless parenting whole.

During two days in the current months, we honor you, not as the perfect parent, since that entity is truly a myth, but as one who still wants to attain that status no matter how unrealistic it is. We honor you for the days when doing your best, with all good intentions, has to be the way it is.

You are magnificent. You are doing the most important work for which humanity can ask. You hold in your hands our future, and you deserve nothing less than dignity and respect at your back.