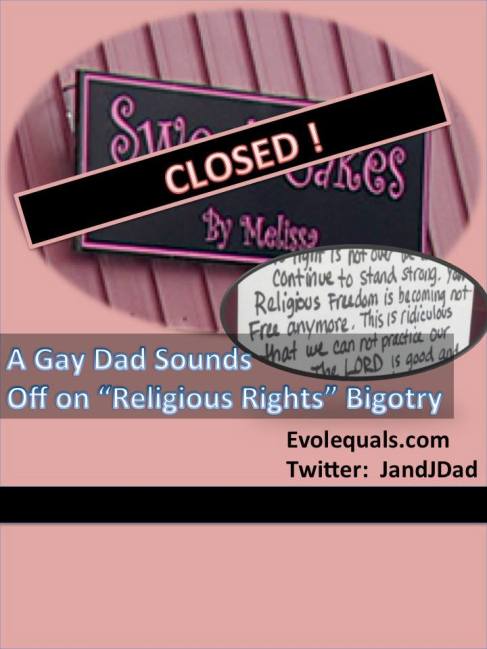 A wedding is one of the most popular and revered fixtures of modern culture. Children, particularly girls, are led to romanticize it. Television shows build whole ratings-grabbing boosts around their fictional renditions of it. Weddings are loved, they are hated, they are dreamed about, they are dreaded. They can be magical and they can be disasters. Whatever they are . . . people remember their own wedding day, good or bad, their whole lives long. They are an important milestone for everyone who has one, and they should be treasured.

Recently, I have been asked to officiate at two weddings. The couples who asked, one opposite gender and one same gender, are both very close to my heart. I am honored and humbled by their requests and take them very seriously. I have been asked to have a voice in the most cherished moments of these friends’ lives, and I will do everything in my power to perform at the level they deserve. These invitations have given me a moment to ponder about people who, when they are asked to become involved in these sacred events, use the requests as a platform to express bigotry instead.

There is a disclaimer at the end of many movies where woodland creatures appear to be ravaged: “No animals were harmed in the making of this movie.” The illusion that there might be such harm was at the whim of the storytellers, and it is their final intention to let you know that they were fibbing for the sake of drama.

There should be a similar disclaimer at the end of same-sex wedding events: “No Christian principles were violated in the union of these people.” Those are the facts. The people in this case who would have you believe otherwise are not storytelling filmmakers, they are some of the bakers, dressmakers, florists, and venue managers in the wedding industry. They want you to believe that somehow supporting two people making a lifetime commitment is a violation of their own “religious freedom.” This is one of the biggest illusionary shell games in public discourse today.

Almost to the case, these offending vendors have demonstrated a complete lack of scruples in any other way toward the very principles they claim to uphold. While they deny service to LGBT couples wishing to marry, they appear to have no problem in ignoring anything else that would fly in the face of biblical standards. Oregon’s Sweet Cakes by Melissa, which shut its doors this week, showed they would marry pretty much anyone and anything, including even animals, but absolutely no LGBT couples. Aaron Klein claims that those speaking out against his discrimination used “militant, mean-spirited Mafia-style tactics” to shut them down.  “I just did not want to be part of her marriage,” he stated, referring to one of the brides he to whom he declined service.  What are the standards at play in his statement?  Dishonesty—there is no evidence of “Mafia” or any other illegal tactics being used.  Hypocracy—the Kleins want freedom of speech, but do not want those who react to their behavior to enjoy the same freedoms (or to have a choice as to where they spend their money). Delusion—the bride asked him to provide a service for her wedding, I don’t mean to speak for her, but I am positive that she had no intention of having him in her marriage at all.

Let’s look at that Washington florist. She also lacked moral standards.  She had no problem flowering the romance and intimacy of two gay men, which should have been the core of her misguided religious complaint, but then pulled back when the two were ready to declare lifelong allegiance to each other (that is, marry), which actually is supported by the Bible.

I personally did my own digging in one of these cases to see if an Iowa venue, the Gortz Haus Gallery, which rejected the union of two men, would hold the same scrutiny over a celebration of another non-opposite gender union: the “marriage” of two corporations.  I sent in the request and described an event of a ceremony and reception to be celebrated by two unifying nameless corporate teams.  The details mirrored and almost mocked the traditional wedding set up.  Would Gortz Haus care whether the companies were ethical and moral?  Would they care if there was love involved or pure opportunism?  Would they care about anything other than the fact that Gortz Haus was being offered money to hold the event?

They did not. Betty Odgaard of Gortz Haus Gallery eagerly bid on my proposed event without a single inquiry into the ethical or philosophical standing of either entity in the union. She stated, welcomingly, “By managing setting arrangements and timing, we have had very good success in similar situations.”

Standing up for Christian principles in general is obviously not the motivator for any of these people; taking a stance against LGBT people is. Even with the most outlandishly anti-gay interpretation of the Bible, not one Bible verse implies that it is wrong to provide services for two people standing up to articulate their love and promises toward each other. Not one.

In fact, there are many references that support doing so: the commandment to love one’s neighbor as one’s self; the commitment and love declared by David and Jonathan; the golden rule; the fact that Jesus himself was a de facto wedding event contributor when he turned water into wine (without making a judgment on the wedding party for whom his service had been performed).

As for the concept of “religious freedom ,” it presents its own unique problematic dichotomy. How can one person’s “religious freedom” be granted at the expense of someone else’s? The existence of multiple “religious freedoms” that are mutually exclusive of one another cannot exist. The U.S. Supreme Court wrestled with this concept in 1878 (Reynolds v. United States), when it was presented with the case for bigamy on the part of the Mormon Church. The Court rejected the “religious freedom” argument, citing the “slippery slope” ramification to unfettered “religious freedom,” which could ultimately force, for example, the legalization of religiously sanctioned human sacrifice by those who believed that God mandated it.

While no one in our modern society is suggesting that people lose their physical lives over “religious freedom ,” those who wrap their bigotry up in this phrase are essentially condemning LGBT couples to the loss of their emotional life. These naysayers would sacrifice the happiness, hopes, security, honor, and dignity of the lives of people in their community purely on the basis of their own personal, albeit inconsistent, belief system. They advocate that others should lose their life well-being in a sacrifice to their own particular belief in God.

This is not religious freedom. It is not principled. These people are running scared from the fact that the world around them has changed. Recently, the New Mexico State Supreme Court ruled that these bigots can express whatever they think and feel, and that they can believe as they wish. They can hang a sign. They can run advertising. What they cannot do is deny prejudicial service and interfere in the loves of others.

However, to achieve a greater sense of true Christian love, our courts, churches, and people must now discard the “conventional wisdom” of decades past and drop these baseless prejudices.

That does not take public aggrandizing and self-victimization. What it takes is guts.