Guest post by Mindy Forsythe.  Mindy is also the adoptive mom in the evolequals story   The Real True Story About How Parents Adopted Out Their Child When He Told Them He Was Gay 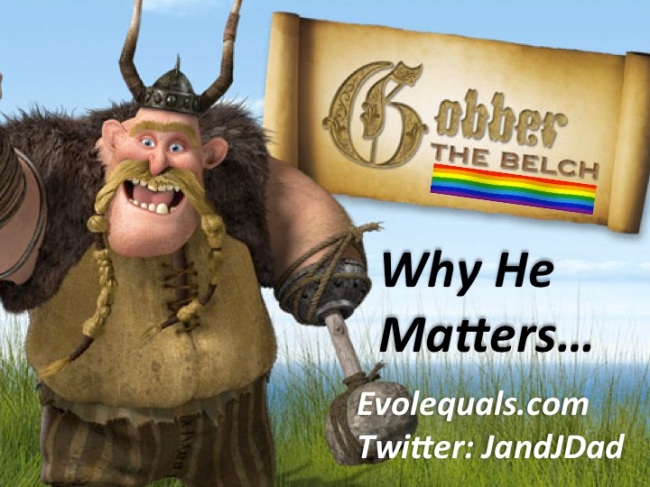 My eleven year old son Mason has been a big fan of DreamWork’s “How to Train Your Dragon”. In the new sequel, DreamWorks plans for Gobber the Belch to reveal his homosexuality.  Dean DeBlois, writer-director and openly gay himself, told E! News that the character’s acknowledgement will be subtle.  Subtle or not, this is exciting news for our family.  We have four beautiful children aged eleven to nineteen.  They are typical siblings…fighting one minute and best friends the next.  Two of our children, however, have a relationship that has shown me just how important and influential DreamWorks’s decision to include gay characters really is.

Mason, the baby in our family, is athletic, intelligent, tough as nails, yet sweet as pie.  He is known for his Mohawk that changes colors from week to week.  He has a quick, impish laugh and an equally quick ire.

Corey is our oldest son.  He is nineteen years old . Even though he is our oldest child, he is also our newest.   Corey joined our family four years ago after he came out as gay at age fifteen.   He felt forced to leave his biological family and when he came to us, Corey was broken and suicidal from his previous home experience.  In our home he found unconditional love.   As each member forged their new relationship with him, there was an evolvement of understanding and compassion for what he had been through.

Mason was only seven years old when we took guardianship of Corey.  Corey and Mason bonded very quickly.  Mason seemed to sense and embrace Corey’s pain and vulnerability.  He often crawled into Corey’s lap or snuggled against his side during family movie time, and I was sure that despite our efforts to shield him from the ugliness Corey had suffered, he picked up on it.  I could see he understood that Corey hurt by the way he would slip his little hand into his at random moments and by the easy way he accepted Corey as a brother.

The age difference between Corey and Mason was just enough that Corey was patient and loving despite Mason’s baby brother antics.  Corey became the perfect mentor for Mason.  He was always willing to throw around a Frisbee, listen to a story or help with homework.  Many weekend nights I would find both boys sound asleep on the couch with a movie still playing.  Their relationship made me smile.   We never directly discussed Corey’s sexuality with Mason; we also never made any effort to hide it.

It was no secret to Mason that Corey liked boys.  All of it was of little interest to him.  When Corey and my daughter Aubrey giggled and whispered about boys in the mall the way teenagers do, Mason rolled his eyes and asked me what in the world was wrong with them.  When Corey’s first boyfriend held his hand, and when our son Andrew invited a girl to the movies, Mason had the same reaction.  All this young love and mushiness made no sense to his little boy brain.  He was much more interested in talking his older siblings into finding frogs and playing baseball.  I figured the day would come that I would finally ask Mason directly his thoughts about Corey being gay, but for the time being, I would allow him to just be a little boy grossed out by all things mushy.

Finally, when Mason was nine years old I decided to ask him what he thought about Corey being gay.  I knew the time was right because Mason had mentioned that some of his friends were using the phrase, “That’s so gay.”  Mason was noticeably upset as he explained to me how he had told them not to say it anymore.  I was proud of his response to them, and I wanted to know more about what he was thinking about having a gay brother.  I prepared myself for a deep philosophical discussion.  I rehearsed answers to the questions I suspected he might ask.  All of my preparation was quickly proven unnecessary because Mason’s answer was simple.  He shrugged his shoulders and said, “Whatever.  Corey likes boys.”  That was his entire, matter of fact, nonjudgmental, nonchalant response.  He said it and then asked if he could go play.  I was left pondering.  Mason’s blunt answer left me with more questions than satisfaction.  It seemed too easy for him.

A week after my original question to Mason, I chaperoned a field trip with his class to the Henry Ford Museum.  Mason and his little buddies spent much of the day learning about Ford’s assembly line and the industrial revolution.  Mason, asked me a number of times if we could go see the bus that Rosa Parks rode in Alabama.  As we made our way toward the civil rights area of the museum, I had second thoughts.  It was one thing for my nine year old to see Parks’ bus and Lincoln’s chair, but I was hesitant for him to see the harsh realities of slavery.

Mason proudly sat in the very same seat Rosa Parks refused to give up.  He posed next to the chair in which Lincoln lost his life.  Then, long after his friends had moved on to other exhibits, he spent over an hour staring wide eyed at all of the civil rights artifacts…from illustrations of slave ships, to shocking slave restraints, to a copy of Martin Luther King Jr.’s  “I Have a Dream” speech.  I answered the questions I could answer, and we read much of the information together.  I could feel Mason’s dark mood as we headed back to the buses to return to school.  As we approached the buses Mason, who had ridden happily with his loud, excited friends in the morning, asked if he could sit with me on the bus.  Surprised and honored, I told him of course.  The bus on the return trip to the school was much quieter filled with exhausted little boys and girls.  Mason tucked himself in under my arm, and I figured he would fall asleep before long.  I was wrong…his mind was working over time.

After a long few moments of quiet Mason looked at me with huge tears in his eyes.  He said to me, “Mom, do people still do awful things to other people?”  I squeezed him a little tighter and responded as gently, but honestly as I could with, “Yes, son they sometimes do.”  Mason looked at me and said, “You mean like people being mean to Corey?”  My heart nearly broke as he began to cry and continued, “Mom, I love Corey, and people are so stupid.”  My baby, just nine years old, had just connected the civil rights fight to his beloved big brother all by himself, and I couldn’t have been prouder.

By knowing and loving his big brother, Mason had learned to embrace and respect not just gay people, but all people. Mason sees Corey not as a homosexual, not as gay…he sees him as absolutely, undeniably, beyond measure…a human being worthy of all the love in his little boy heart.

Allowing children to learn to see gay people as simply people…ordinary, everyday people, should not be the exception or extraordinary.   It should be no big deal that a cartoon character is portrayed as gay.  Children need to grow up seeing all types of people.

Thank you to DreamWorks for giving a generation of children just that opportunity.   DreamWorks recognizes that gay characters are pertinent, necessary, innocent, beautiful and natural.  Homosexuality is not merely an adult subject.  Introducing children to gay people allows them to develop love and respect for all people, even those that may be different than anyone else they’ve met before.

I have learned through my son Mason that Steven Sondheim is right, “children will listen”, even when we adults don’t think they are paying attention, and what they do with that information can astound us.

Listen to a podcast radio interview with Corey and Mindy here.