A Gay Dad’s Letter to Gay Teen, Austin Wallis, and the High School That Rejected Him 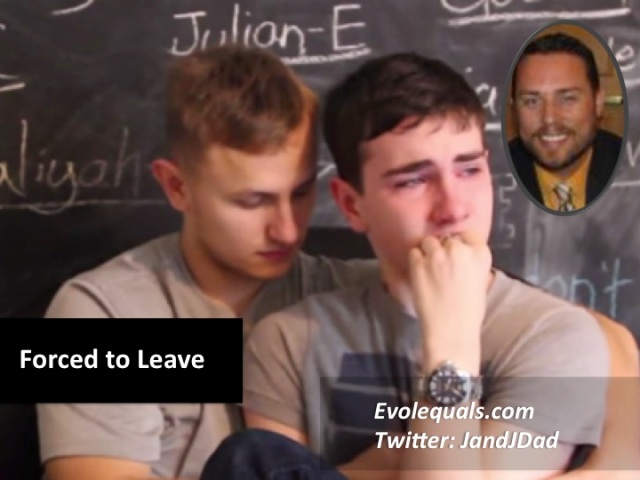 The world of teens and tweens can be a treacherous one. As the dad to two 12 year olds, I see it as a world where childhood cushions and play have fallen away and new, somewhat complex challenges have emerged. It is a world where peer relationships and socializations are paramount. Independence is practically a life force and hormones seem to be pumping through veins previously filled with sugar and spice. It is a world where kids discover themselves and those discoveries can range from the thrilling to crisis, and sometimes both at the same time.

Adults standing on the sidelines to this whirlwind try our best to lead, nurture and inspire. We try to guide our young charges to being their best, and set themselves up to capture a destiny worthy of the love we cloak them in.

Some adults do this except in the cases where the child in question is gay as Austin Willis, a high school student in Texas, discovered this week. Austin has been on an affirming journey over the past year. He not only has discovered who he is, he has introduced the real him to his personal social circles and the public at large through a YouTube channel.

His videos are fun, silly, charming, and his relationships with teachers and friends are warm and mutually supportive. Life has been good, even granting him a handsome boy friend.

From my perspective as a parent, seeing my child find himself so progressively would be life affirming. The principal at Lutheran North did not seem to share that view of young Austin’s development. He categorized it instead as the promotion of sexually immoral behavior. His answer was not to guide Austin Wallis’s development, but to shut it down all together.

We tell our kids to be true to themselves, to nurture self-respect and live with respect to others. Lutheran North did not encourage Austin in any of those initiatives. Instead, they asked Austin to hide who he is, pretend to be otherwise — or leave. He chose to leave.

I am choosing to write them, and him, a letter.

Gentlemen. As a father and a Christian, I wanted to weigh in on the current controversy in which you both are active participants. As a parent, I take a sincere interest in schools and their efforts to establish principles for their students, guide them into the world and create the new citizens who will lead us into the future. Whether or not my sons attend a particular school is irrelevant. Their peers, others who may be in their world, will have attended that school and will influence the world in which they live.

This has already happened at Lutheran North. Austin, you have already emerged as its product onto the world stage. You have made yourself known, from your joys to your recent challenges.

Yes. Mr. Lusk had a rule. That rule reads: “Lutheran High North reserves the right, within its sole discretion, to refuse admission of an applicant and/or to discontinue enrollment of a current student participating in, promoting, supporting or condoning: pornography, sexual immorality, homosexual activity or bisexual activity; or displaying an inability or resistance to support the qualities and characteristics required of a Biblically based and Christ-like lifestyle.”

I personally believe that “rules” are limited entities. They are based on bigger principles but address very specific situational elements. If the situation changes, the rule then does not have relevance. A city street might have a “rule” of 15 miles an hour due to high incidence of cross traffic. If all cross traffic is blocked, the “rule” needs to be adjusted and 40 miles and hour might be the appropriate limit to fulfill the bigger principle of public safety.

I am not necessarily saying that Mr. Lusk needs to throw out his rule, although its homophobia is evident, but I am suggesting that he needs to understand, support and advocate for the larger principle behind it. The fact is — there was a violation.

No worries, Austin. Neither the rule, nor its underlying principle were violated by you.

The rule states that students must not participate “in promoting, supporting or condoning pornography, sexual immorality, homosexual activity (emphasis mine).” It does not say that you cannot be gay.

If the school somehow wants to take issue with the affection you share on camera with your boyfriend and classify that as “gay sex”, then they need to read their Bibles. Your level of physicality is reflected there. Here is the description of the affection between Jesus and St. John at the last supper: “When Jesus had thus said, he was troubled in spirit, and testified, and said, Verily, verily, I say unto you, that one of you shall betray me. Then the disciples looked one on another, doubting of whom he spake. Now there was leaning on Jesus’ bosom one of his disciples, whom Jesus loved. (John) Simon Peter therefore beckoned to him, that he should ask who it should be of whom he spake. He then lying on Jesus’ breast saith unto him, Lord, who is it?”

I am not implying that the affectionate cuddling on Jesus’s chest by John was participating in, or advocating for gay sex. Likewise, your school cannot and should not be implying the same of you.

So, no Austin, you did not violate the rule. You also did not violate its principle to “to support the qualities and characteristics required of a Biblically based and Christ-like lifestyle.” You have been a model for the “golden rule.”

Mr Lusk, you, however, failed this principle in several ways. First, you bore “false witness” against Austin by using a regulation about sexual activity, when in his public pronouncements he specifically stated he has had none. Your punishment of him was not reprimanding him for something he has done, it is reprimanding him for who he is. That is bigotry, not a “Christ-like” lifestyle. Christ was not a bigot.

Second, his social media activity reaches out to encourage and send love to others and to save them from harm. Your own social media activity has been dishonest and self-serving. His is to make fun love-filled videos, yours has been to interact with the review site Yelp and fraudulently portray yourself as a consumer of your school’s services. You then bolstered your school’s online review standing by rating it the maximum of five stars, designed to influence its average total score. (See image below.) 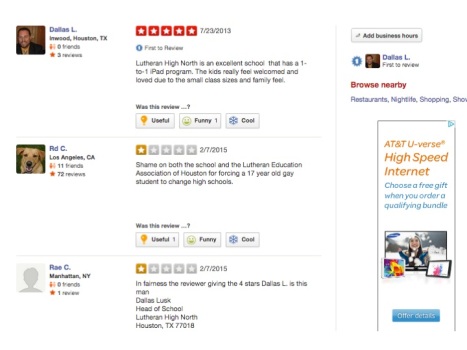 Rubbing salt in the proverbial wound of your dishonesty was the statement you made in your self-review of the school. You stated, “The kids really feel welcomed and loved…” By your own behavior, they are made to feel loved and welcomed, unless they are gay. Then they are devastated.

This leads me to my biggest issue with your point of view and actions. As a parent, I deal with the holistic range of my sons. They are not perfect, despite what I might tell you on a given day. There are very few issues that would put them into a zero-sum game emotionally and spiritually however. They may do things that are absolutely wrong, but I help them find ways to do those things better, to make an improved choice, even if they cannot make it to a perfect one. For straight kids in your school, you follow this model. You work with them to be the best of who they are, to help them be the best they can be.

You have demonstrated there is no such scale for a gay student. He is gone, seen as worthless automatically. He has no chance, in your eyes, to better himself as a person, to achieve self-improvement. To you, if he is himself, he is worthless — period. The rest of his behavior could be saintly, or he could be a charlatan, it would make no difference.

To me, that is a travesty, whether it was from a parent, from an educator and most certainly from a follower of Christ.

I don’t mean to be completely negative about your school, however. I have to acknowledge that it has produced a man who does live up to the heart of Christ, who lives honestly and who I would be thrilled for my sons to emulate.

He is the young man you forced to leave, Mr. Lusk.

Mr. Willis, that man is you.

25 Responses to A Gay Dad’s Letter to Gay Teen, Austin Wallis, and the High School That Rejected Him