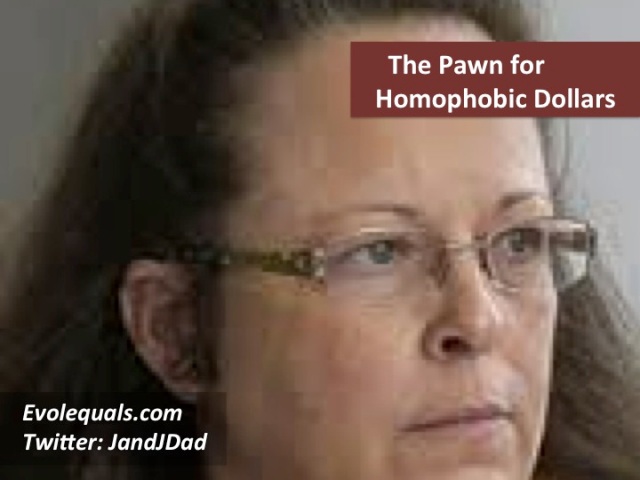 Along the metaphorical highway on the journey to LGBT civil rights, there are many collisions. These are when willful ignorance runs headlong into justice. Few of these are as fascinating as the wreck taking place in Rowan County Kentucky. It seems we in the American public cannot help ourselves to rubber neck and gawk as a group of cold hearted counter people, led by a county clerk, rudely deny a polite gay couple their marriage license.

A small melodrama has unfolded. The “good guys” are a couple of Davids — Moore and Ermold, who want to get married. After decades of LGBT progress, it is exactly in their legal rights to do so. The “villain” of the piece is a woman named Kim Davis who refuses to issue them a marriage license. She had denied the same to a second couple, James Yates and William Smith Jr.

The governor of the state has told her to comply with the request, as has a federal judge.

Her representation, the right wing Liberty Counsel, has told her to refuse as they create a high profile scene climbing the judicial appeal process. She calls her own homophobia “religious freedom”, the Liberty Counsel may call it a number of things, but what it really is to them is… profit.

As a gay dad, Ms. Davis’s behavior bothers me on multiple levels. I look at the messages not just to me, but to my kids and their counterparts in LGBT families across the nation. First and foremost is her attempt to disparage families such as mine and declare us invalid due to her own belief system. Her treatment of two prospective families is humiliating and demeaning. Kids who are in LGBT families, and kids who are LGBT themselves should not be sent this message that a government official would rather they simply not exist.

Second, however, is in her behavior. I am teaching my kids principles of responsibility and citizenship. Ms. Davis violates that principle at every turn.

I have written her a letter.

Over the past few months, I have been watching your reaction to the Supreme Court ruling on marriage equality for families such as mine. Your stance has been in equal parts disappointing and confusing.

I understand that you are angry that the fight for marriage equality did not go the way you had hoped. While I am pretty sure I will not be able to persuade you into liking the decision, as a public servant, I do expect you to respect it.

Respect is the key issue at hand, for you, and for the gay couples of whom you refuse to help. You are demanding a respect of your beliefs far beyond what is reasonable, and they are demanding respect for their ability to self-determine the course of their own lives. Unlike yours, their demands are not just reasonable; they are the way things should be.

Your demand that the terms of your job adhere to your own standards rather than the objective standards of law reminds me of how my 12-year old son would like rules applied. He would like for his brother, who is 13, and him to be able to go to the local pool unattended. The pool’s rule for unattended kids is 14 and older. Jesse applies his logic this way: “Dad. If you add both Jason’s and my ages, together we are 25. That’s the same thing.” (Imagine them trying that logic at the local dance bar.)

His logic and the rules are not the same thing. Neither is your desire and the rule you want to break on behalf of “your beliefs.”

I have to admit right up front that as a Christian myself; I do not understand the religious system you claim to have. Nowhere in the Bible does it demand that you impede the family of a same sex couple. It does not imply that you should. The key principle of the golden rule, to do unto others as you would have do unto you, and Christ’s second great commandment to “love your neighbor as yourself”, absolutely are counter to your current behavior.

Much has been made of the fact that your own marriage license indicates you have been married multiple times. There are, theoretically, county clerks who would find your requests for re-marriage counter to Jesus’s directive on divorce. Would you react to them deeming YOU as “unmarryable” acceptable?

I wouldn’t, and I would defend you. I embrace Christ. I feel He has given us the awareness to understand that His directive in the discussion on divorce was to a specific time and place. His purpose was not to saddle people like you into hopeless permanent unions, but to protect women from destitution.

Even though I am confused as to your exact motivation, I ask that you reconsider your choices for a whole other reason. You set a horrendous example for young people, like my sons, who should be learning how to effectively co-exist with others in our society.

Your behavior reminds me of Jesse’s. He has a high sense of what he considers right and wrong just as he did about the pool, and when confronted by a situation holds his stand to the bitter end. Many times his stand it the correct and appropriate one. We get into trouble when it is not.

In those situations, he, like you, will want to only do what he wants, when he wants. It has taken many discussions and his growing maturity to understand that by being part of a team, a village, a country and by agreeing up front to the terms of engagement, he does not get to violate rules just because he wants to.

It is a lesson I wish you too would learn.

You also seem to share the need for life lessons around choosing with whom you associate. When Jesse is putting his foot down on something he needs to do, but doesn’t want to, he calls in his allies for credibility or support. “My friends don’t think that is fair!” Invariably those he calls upon to do the wrong thing have a vested interest. They want him to take the action, not for his well being, but because it serves their interests.

Such is your relationship with Liberty Counsel. As the Lexington Herald-Leader observes, the Liberty Counsel “describes itself as a nonprofit that provides pro bono legal representation related to “religious freedom, the sanctity of life, and the family,” funded by tax-deductible donations and grants. In 2012 those gifts reached just over $3.5 million and in 2013 topped $4.1 million, according to IRS filings.” They further point out that the group’s involvement with you is not because they even believe they can bring you satisfaction, but that “Liberty’s attorneys know they can’t win the case in Rowan County. Same-sex marriage is legal since the Supreme Court’s June 26 decision and it’s Davis’ job to issue marriage licenses. So, why is Liberty Counsel marching alongside Davis in this losing cause? It takes a lot to keep that marketing machine humming and those executives paid, and the only way to keep those donations coming is to stay in the news. For that purpose a losing cause is just as good as, perhaps better than, a winning one.”

Liberty Counsel seeks to attract emotionally charged hate money from those wanting to harm all gay families, from those who would wish to criminalize homosexuality, from those who see gay marriage and abortion with equal passion. Just because they have rallied to your cause, they are not your friends either however. What they are doing to you is worse than what they will actually be able to affect towards LGBT families.

My wish is for you to take a deep look into what would make you the better person. Your “friends”, who themselves will reap millions, are telling you to hang out until the end where you will be potentially unemployed, and perceived globally as a selfish intolerant hypocrite who was cruel to her neighbors. If you succeed on your current plan at the behest of Liberty Counsel, they will make a lot of money and in a paradoxical way, you will be the loser.

This “Good Samaritan” friend is telling you to do the opposite: do your job, respect the people making their own life choices, and trust the God you profess to believe in that love will prevail in the end.

If you do that instead, the couples you are denying will get the licenses they wish. They will walk away with the thousands of protections they deserve.

You will walk away with dignity. History will not regard you as a hate filled martyr, but a woman who changed her mind, evolved and chose the path of compassion.

The Liberty Counsel won’t be able to use you for fund raising.

You won’t just cease to be a pawn by those seeking to profit from your disgruntled feelings. You will be the real winner.

A few years later, you will be walking down the street of your town. You will see a gloriously happy little girl holding the hand of her dad. She will smile at you, and give a little wink. As that visual “butterfly kiss” warms your heart, you will look to her father and realize that you know him. He is one of the men you originally tried to deny a marriage license. Your eyes will dart immediately back to the little girl… who will still be beaming at you.

In that moment, you will know without a doubt that you ultimately did the right thing.