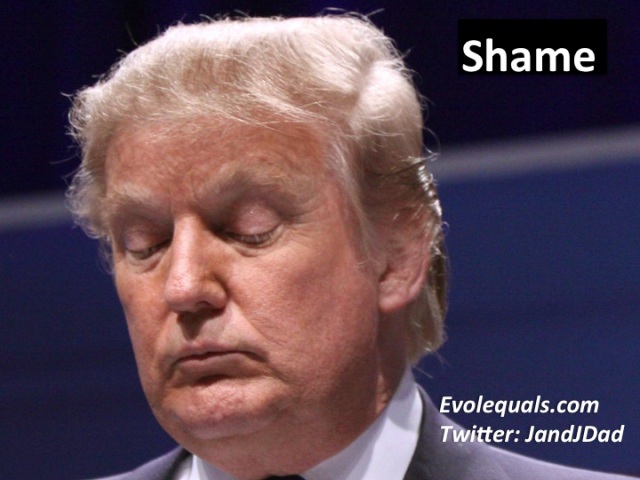 An heiress and a ghost had it right.

Since the egomaniac and reality star Donald Trump announced his “long shot” candidacy for President, we have been “treated” to constant absurdities, deceptions, upheavals, dramas, skullduggeries and melodramas that have thrown public discourse into unprecedented upheaval.

Through it all, mixed messages and deceptions ruled any given day. This has been particularly true on the subject of LGBTQI rights. While making claim to be the most LGBTQI friendly Republican to grace the ticket, maybe ever, Trump filled his docket with supporting players who were, and are, easily characterized as LGBTQI philosophical enemies. They do not seem to be unfettered however. Rumors of a particular pending anti-LGBTQ executive order filtered out via social media, followed by news that the non-homophobic Ivanka had squashed it through internal efforts.

Then there was billionaire Betsy DeVos, nominated for the Secretary of Education. As a dad, I was worried about her credentials and the conservative reputation of her family. She would be a disaster I feared for the plight of LGBTQI youth in the public school system.

I was wrong. In the first battle on her plate, the question on whether to rescind the Obama administration guidance on transgender student public facilities protections, she came down squarely on the right side. She lost the fight. But she, the heiress, big campaign donor, was right. (Until she started them echoing the administration and calling the previous guidance “overreach.”)

Also the ghost of civil rights pioneer Coretta Scott King was right. A letter from her hand decried the credentials of the new Attorney General, Jeff Sessions. It pointed to his small mindedness and inadequacies standing for the civil rights of people not privileged with mainstream power. Her outreach from the past was as relevant now as it was then. He is the proponent of stamping out the students’ protective guidelines, and the Attorney General who chose to abandon trans students nationwide. He won the fight.

He, and the President he serves, are both wrong.

I know they are wrong on this issue because, being a parent in California; I have been through this battle before. In the summer of 2013, California led the nation in transgender teen protections in its schools. California Democratic Assembly member Tom Ammiano, along with his co-author, Democratic State Senator Mark Leno introduced, and successfully lobbied to pass the School Success and Opportunity Act. The law stated that; “a pupil be permitted to participate in sex-segregated school programs and activities, including athletic teams and competitions, and use facilities consistent with his or her gender identity, irrespective of the gender listed on the pupil’s records.”

At the time, not everyone liked the idea. California dad, then Republican Assemblyman, Tim Donnelly, not only voted against the law, but announced that he would pull at least one of his sons out of the public school system because of its enactment. In an editorial he wrote, “My 13- and 16-year-old boys were horrified at the idea of sharing a bathroom and locker room with a member of the opposite sex, after having discussed AB 1266 with them.”

I had addressed Mr. Donnelly in one of my ‘Gay Dad’ editorial letters. I told him that as he was taking his sons out of public school, in turn I would remove my two boys out of private school and putting them into a public school- (which is what I actually did). Net for the school system… no loss. Don’t let the door hit you on the fanny on the way out, Buddy.

Since then, there have been exactly zero issues related to the law’s enactment. Months after the law’s enactment, anti-transgender activists hit California streets in an attempt remove it. Their initiative was a non-starter failing to even get it ballot qualification.

The retraction of President Obama’s guidelines should also have been a non-starter. It wasn’t, and it puts precious LGBTQI lives at risk. Here is my new letter to President Donald Trump.

Your administration has rolled back the guidance on the treatment of transgender kids in schools. You believe that guidance is legally unclear, that decisions on the dignity of these kids should rest in the determinations of the individual states, that the original directive had been done “without due regard for the primary role of the states and local school districts in establishing educational policy.”

I have one question.

Why the hell does that matter?

When you championed yourself as an LGBTQ hero, you declared that the devastation in an Orlando Nightclub was one that you personally could have prevented. In your mind, the deaths of those young people were yours to save. In holding to your current principles, it is odd you did not declare that the circumstances around that tragedy to have been subject to the determination of the local government.

Let’s be clear, these directives are not really about bathrooms. They are about visibility or disappearance. They are about life or death. Actress Laverne Cox made the point beautifully in comparing the oppression of transgender kids with Jim Crow bathroom oppression of African American people in the south.

The intent was not about privacy—bathrooms are all private. We are each contained in our own, hidden from view, stalls.

The intent is to erase a group from public view. “What people should know about these bathroom bills that criminalize trans people… is that these bills are not about bathrooms.They’re about whether trans people have the right to exist in public space. If we can’t access public bathrooms, we can’t go to school, we can’t work, we can’t go to healthcare facilities ― this is about public accommodations and public accommodations are always key to civil rights. I can’t help but think about that moment from ‘Hidden Figures’ when Taraji P. Henson’s character has to walk 45 minutes to the bathroom ― Gavin (the transgender teen with a case pending before the Supreme Court) had to go to a special ‘gender neutral’ bathroom, a nurses bathroom that was way out of the way.” Cox observed.

The message is clear. “We want you erased. We want to pretend you do not exist.”

That is the issue. Mr. President, the kids this is targeting hear that message, and what is worse, they act on it.

In short, Mr. President, as the result of this action by your administration, like in Orlando, young people… children… will die.

This time, someone’s child, their teen, will die not because of an extremist. They will die because of you. Statistically, it is certain this will happen somewhere, somehow, in one of those less progressive states that you “left it up to”.

A child will die.

I am a dad. You are a dad. Would you not seethe at the leader who allowed that to happen to your precious son or daughter?

A child will die, and you could have kept it from happening.

A study had shown that by the state embracing marriage equality, less LGBT teens have died. Can you imagine the effect of a law that was not just tangential to their current life, but one that gave them dignity and support in the present? Pure logic shows it would have an even greater effect. You are taking that life affirming support away.

For what purpose does this action accomplish sir? You would be over-riding a mistake misguided homophobes want to make that has protected exactly no one. California has had these protections for our transgender kids statewide for four years and in the Los Angeles area for thirteen. How many crimes, how many incidents have these permissive laws inspired? Exactly none.

Through these actions of your administration, a child will die. When he or she does, please do not think we will look away. We will look to Orlando, and we will look at you. We will know despite your claims, that in Florida, you were not in fact the potential savior. Those young people would have died no matter what you did.

In the trans teen suicides to come, we will know that you were worse than the man who did not save kids. You, and your administration were the ones who pulled their triggers.

Twitter won’t save you. Crying “fake news” won’t save you. You will have grieving parents and a vast grieving community. We will not fall from your view with the next news cycle. We will never forget this moment, and we won’t let you forget it either.

It will have been the moment that you could have done something life saving and important.

Once upon a time there was a teen who called herself Leelah. She could not tolerate the rejection and invisibility of trying to live being transgender. She committed suicide but begged the world to let “her life matter.”

Her life and the lives of all trans kids matter to me. They matter to a lot of people.

Their lives, and their visibility, should matter to you.

If they don’t, you will demonstrate that you are merely an “Apprentice” President, and you should be done. You work for us, as a nation, and it is our mandate to turn to you, and feed you back your own trademark reality-TV line:

If you are a transgender person thinking about suicide, or if someone you know is, find worldwide resources at http://www.stop-homophobia.com/suicideprevention.htm . You can also reach the Trans Lifeline at 877-565-8860 or the National Suicide Prevention Lifeline at 1-800-273-8255. LGBT youth thinking about suicide can also reach out to the Trevor Project Lifeline (ages 24 or younger) at 866-488-7386.

Thanks to Brody Levesque for edit help

Support this suicide prevention card project and help us to save lives: click here>http://bit.ly/2mbHB3M< To help.