A Gay Dad Challenges Mike Huckabee to a Basketball Game 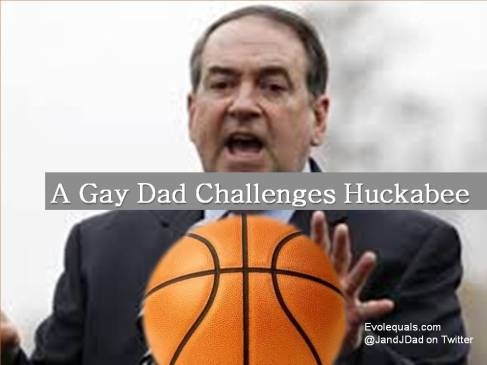 I have a confession to make. As much as I loathe clichés and generalizations, there is one that I live up to with incredible gusto. I typify the gay guy who doesn’t do sports. Not even a little bit.

From the pains of never getting picked for teams in PE to the days of racking up huge Trivial Pursuit momentum only to be demolished by the final Orange pie question (for those too young for the original Trivial Pursuit, that was the “sports” category), I am the ultimate sports nerd. I have owned that fact and I have loved it. I happen to look forward to going to the mall on Super Bowl Sunday. I have the place to myself. My Super Bowl was always the one where they gave out statuettes and guessed who designed the dresses.

Well. That was then, and this is now. My embrace of the nonsports gay guy within has been threatened to its very core.

Jason Collins has come out, and we, his gay brethren, realize that we can no longer afford to refer to basketball as “oh yeah, that’s the big orange one, right?” Don’t get me wrong, I think what Jason did is heroic and fantastic. It is just that now we . . . I . . . have to get serious.

It comes just in the nick of time for me. My younger son Jesse is showing a real talent for the game, so the dad in me will be out there bouncing a pigskin . . . er . . . un ballon de basket-ball . . . eventually, anyway.

I am feeling feisty, and now that I have decided to swap out my inner klutz for my inner jock, I need to find an opponent with whom to skirmish.

I found one. None other than antigay rhetoric hoop shooter, Mike Huckabee.

Mr. Huckabee should be a good choice. While he has overcome weight challenges in the past, and run marathons, he is also a few years older than me. He also apparently has downed more than a fair share of cholesterol-laden fast-food chicken. Plus, I figure that if he voiced a heinous opinion about the Sandy Hook shooting like “We ask why there is violence in our schools, but we have systematically removed God from our schools. Should we be so surprised that schools would become a place of carnage?” I can gently remind him that God has systematically been removed in equal measure from the basketball court. I plan on carnaging him there like nobody’s business (especially after reminding myself about his idiotic and insensitive remarks). Here is my invitation to him:

You don’t know me, although you talk about me all the time as if you do. I am a gay dad. As you are probably aware, the LGBT world has now integrated basketball as part of its sphere. It is one of the more secretive clauses in the Gay Agenda. With Jason Collins as our lead, we are now full steam ahead.

So I would like to challenge you to a game. You pick the time, and I will be there. (I already picked the court; it’s a Supreme one with these nine cool custodians.)

I know basketball is near and dear to your heart, and we are going to have to discuss your strange viewpoint about the rules. Recently, you said on the subject of gay marriage, “On this issue, I recognize the culture is moving away from the traditional standard, but it’s almost like saying, well, we have a basketball team and nobody on the team can hit the goal that’s ten feet off the floor so we’re going to lower the goal down to six feet and that way everybody can slam dunk the ball. So the question is, have you improved your basketball game? Or have you actually just changed the standard so it looks like you’re doing better? And that’s my concern.”

That inability to truly understand the concept of “standards” is why you are going to lose. The LGBT team not only plays within standards, we stand up for those standards more than you do.

The American Sociological Association can act as our referee on this. They say, “Children fare just as well when they are raised by same-sex parents as when they are raised by opposite-sex parents.” In fact, they will tell you that not only do you not need to lower marriage goals and standards, but bring them on; they just make us better. Their point is “The research supports the conclusion that extension of marriage rights to same-sex couples has the potential to improve child wellbeing insofar as the institution of marriage may provide social and legal support to families and enhances family stability, key drivers of positive child outcomes.”

Following your thought process, you are saying that one team is going to be better at playing the game because they are the ones who have the greatest likelihood of bringing the ball to the court. Period. For no other reason. In your set of standards, sportsmanship, ability, and mature planning are irrelevant.

As we have seen from all the people who mistreat and abuse their basketballs, there is nothing that indicates that bringing a ball into the building correlates to scoring with it once they’re on the court. Nothing.

Regarding the issue of lowering the goal down from ten to six feet for us, don’t be silly. You have systematically tied our hands and legs and thrown us out to play by your rules for years. Not only have we stepped up, we have succeeded. A Cambridge study finds not only that gay-dad marriages are as ideal and in some ways better than others, they are also the most likely to seek out helping children in need of homes.

The fact is, your team has ignored and trampled standards for years. It is only after discovering that our team wanted to play on your turf that you suddenly started claiming that somehow, when we were the ones dribbling the ball down the court, taking our shot, and making a basket, that because of our anatomy, the game could no longer be called “basketball.”

Jason Collins has made it clear. We are in basketball now. Thanks to him, we are visible in the real-life kind. We are also visible in your analogous basketball kind. We will win at both.

Oh, and by the way, do you know what it’s called when a ball flies into the hoop and makes the basket without even touching the rim?

That is something I can get behind.