How Can We Stop a Modern-Day Russian Adolf Hitler? 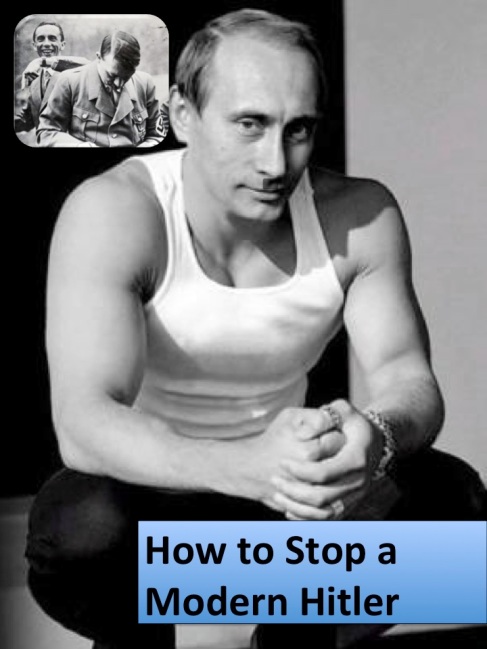 “Participation in these games must not be construed to be an endorsement of the policies and practices of the Russian government,” said a leader of the American Olympic Committee and the anti-boycott forces. “Measures have been adopted to ensure that there will be no violation of the fundamental principles of fair play and sportsmanship, or the Olympic standards of freedom and equality to all,” he added.

“There was some talk about the Olympics being boycotted because of what Putin was doing to the gay people in Russia,” said one athlete. “But it was never discussed amongst the team members. We aren’t interested in politics, you see, at all. We are interested in going and winning.”

We’ve all heard the quotes, right? There are reports of Russia beating up LGBT people—bad—and enacting percussion around them, stripping them of rights and sending them to detention camps. Now the Olympic Games are scheduled to take place in Russia next winter. What to do, what to do? Boycott the games? Boycott vodka?

What is going on now is not unprecedented. In fact, the quotes above are not about Russia at all; they are real quotes, but they were doctored slightly. I changed a few words. “Russian” and “Russia” should say “German” and “Germany.”

Here are the 2013 statements: “As a sporting organization, what we can do is to continue to work to ensure that the Games can take place without discrimination against athletes, officials, spectators and the media,’ the IOC said in a statement. “To that end, the IOC has received assurances from the highest level of government in Russia that the legislation will not affect those attending or taking part in the Games.”

“The Olympics are not a political statement, they are a place to let the world shine in peace and let them marvel at their youthful talents… I respect the LGBT community full heartedly, but I implore the world not to boycott the Olympic Games because of Russia’s stance on LGBT rights or lack thereof. I beg the gay athletes not to forget their missions and fight for a chance to dazzle the world.” (Johnny Weir)

Those statements are about Russia now. See any difference? I don’t. Neither does playwright Harvey Fierstein, who said in a recent Op Ed piece, “Mr. Putin’s campaign against lesbian, gay and bisexual people is one of distraction, a strategy of demonizing a minority for political gain taken straight from the Nazi playbook.”

Harvey is dead on. Putin has been crafting a strategy for years and it parallels the strategy laid out by a man named Joseph Goebbels, the architect of the “Nazi playbook.”

It makes sense, in a horrible, immoral, horrific life-disillusioning way. It is a tale of a former superpower trying to emerge from its own devastation. Russia faces the world as a shell of what it once was. Its people are angry; its economy is in shambles.

In The Face of the Third Reich,by Joachim C. Fest , Goebbels’s contribution is described. “For Hitler’s sombre, complex-determined visions, his initiative, ecstatic relationship with the masses, Goebbels found the techniques of persuasion, the rationalizations, the slogans, myths and images. It was from Goebbels that der Führer, the term by which Hitler appeared as redeemer, demiurge and blessed saviour, received its visionary content. He astutely turned the initially irresolute Adolf Hitler into der Führer and set him on the pillar of religious veneration. With strenuous Byzantinism, consciously mingling the sacred with the profane, he spread around Hitler that messianic aura which so appealed to the emotions of a deeply shaken nation.”

Putin has been putting the same techniques into action. Before 2008, an organization called Nashi was organized. It was a youth-oriented, pro-Kremlin group meant to go up against street forces who opposed Putin. Nashi based much of their own internal directives on plagiarized writings by Goebbels. The practices are documented in the film Putin’s Kiss. Helle Faber, the producer, stated, “It was shocking for us to realise that this organisation was actually established in Russia . . . we were shocked about the undemocratic methods they used and we were shocked that this was actually going in on 2008, 2009, when we started doing the film. I think that we really have to be aware of organisations like that, because in my opinion it’s just like the Hitlerjugend in the ‘30s. I thought that the world had become wiser, but we obviously haven’t. So I think it’s very important to put the focus on an issue like this.” Nashi became a political organization in 2013 and now operates under the party name of “SMART Russia.”

So, is Putin on his way to becoming our generation’s Adolf Hitler? He is behaving that way, and his actions mirror those of the Nazis as described by the site Yad Vashem, “Nazi anti-Jewish policy functioned on two primary levels: legal measures to expel the Jews from society and strip them of their rights and property while simultaneously engaging in campaigns of incitement, abuse, terror and violence of varying proportions. There was one goal: to make the Jews leave Germany.”

As a gay dad, I was terrified and sickened to read further in Fierstein’s piece: “it is rumored that Mr. Putin is about to sign an edict that would remove children from their own families if the parents are either gay or lesbian or suspected of being gay or lesbian. The police would have the authority to remove children from adoptive homes as well as from their own biological parents.”

Unlike those in the United States who continue to leverage homophobia for political gain, Putin has but one single point of leverage: The majority of his people are anti-gay. For America, the momentum has shifted toward an LGBT-affirming majority, and although homophobic leveraging has not by any stretch been eradicated, it continues to diminish. This shift can be attributed to the tireless work of LGBT advocates and allies, to educate and inform those whose ignorance make them easy prey for inciting bigotry and hate. Sharing real people with real stories has helped all Americans to begin to see that indeed we are all the same: Love is love, and families are made from love.

In my opinion, that is what we must try to do for Russia. Through information and education, the same methods used for decades in the West, we need to fight homophobia at the core in which it thrives: ignorance.

Here are some strategies I would suggest implementing:

Hatred and fear are formidable political action motivators. Truth and love are their adversaries, and equally effective, as the past several years of advocacy in America have begun to demonstrate in concrete results. We need the Russian people to know us. They need to see the gay dads and lesbian moms who have nurtured children, many saved from horrible lives in foster care. They need to see our love stories. They need to understand our humanity.

33 Responses to How Can We Stop a Modern-Day Russian Adolf Hitler?