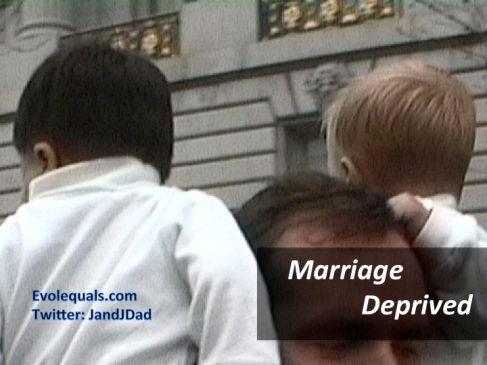 The English language can be a funny thing.  The same words can be used in different contexts and have very different impact.  I remember receiving a letter from a videocassette manufacturer from England when I was a young professional working for a film production company.  It was an introduction letter to our female vice president.  It read, “I would be so pleased if in the next few weeks I would be permitted to come knock Ms. Juden up.”   I showed her the letter.  Her response was, “He had better be giving us one hell of a deal on wholesale videocassettes for THAT!”

Recently, a blog piece by Seth Adam Smith went viral around the turn of the phrase “Marriage isn’t for you.”  The point of his article was from a discussion after his wedding with his dad. “My dad giving his response to my concerns was such a moment for me. With a knowing smile he said, “Seth, you’re being totally selfish. So I’m going to make this really simple: marriage isn’t for you. You don’t marry to make yourself happy, you marry to make someone else happy. More than that, your marriage isn’t for yourself, you’re marrying for a family. Not just for the in-laws and all of that nonsense, but for your future children. Who do you want to help you raise them? Who do you want to influence them? Marriage isn’t for you. It’s not about you. Marriage is about the person you married.”  Seth’s message was embraced by many for the idea of  selflessness in marriage  and debated by others about how much self sacrifice is too much.

Of course, the sentimental humor of the piece was the double entendre of implying that some heterosexuals might not be fit for marriage.  Unfortunately there is no double entendre being used this past week in Utah for same sex couples.  Those couples are being told “Marriage isn’t for you”.  This time, the implication is not that marriage is actually for one’s mate, one’s family and about the loves of one’s life.  This time, marriage “is not” for them either.  The governor’s office has stated that their position is “not only a prohibition of performing same-sex marriages but also recognizing same-sex marriages”. Meanwhile 12-year-old Riley Hackford-Peer, someone who a marriage should be “for”, for his protection, his dignity and his own self-worth, spoke on the capital steps about his lesbian moms, “Some people do not believe I am from a loving family, they are WRONG… sometimes I felt really scared that my moms weren’t married.  I imagined being taken away from one of my moms.  At school we talked about things we hope to see in our lifetime.  I said I hope to see my moms get married…in Utah.  On December 20th, it happened, I saw my moms get married …IN UTAH.  It felt like fireworks bursting in my heart. It was the second happiest day of my life.  My first happiest day was on the day my little brother was born… but Governor Herbert wants to treat my moms unfairly.  He says he wants to ‘protect families’.  I want to tell him that my family deserves protection too.”

“No,” says the state of Utah to Riley Hackford-Peer, “marriage is not for you.”

Like the young Mr. Hackford-Peer, a state said something similar to my sons once.  It was Valentine’s day 2004, and the mayor of San Francisco had declared that the city would start legally marrying same sex couples.   I proposed to my partner, and the other father of my sons, that we go and marry.  We knew the likelihood of our marriage being invalidated was high, but we went anyway.  Like Seth Adam Smith’s dad said, we knew this marriage was for our kids, and they were worth risking any disappointment we might face.  We hoisted the then two year olds on our shoulders and went.

It was unlike anything we had ever experienced.  The line was around the full city block and we had arrived in the morning.  We were interviewed by the local news crew (our interview opened the 6pm local news that night).  We carried our sons up the steps, into the office for paperwork and then into the rotunda for an official to marry us.

Days later, injunctions came down, and those who were in line were told, “sorry, marriage is not for you”.  I remember the pictures of anguish of the people who were fully expecting to marry that day.  The woman who had been next in line with her partner, who had been jubilant moments before, was instantly hysterical with grief.  The pictures told the story of new kind of disappointment I had never seen before.  It was a mix of humiliation and helpless anguish.  “You are not OK being who you are.  Marriage is not for you.”

Soon other rulings came down from the court and our precious marriage license that seemed to glow with a tint of a miracle turned back into a worthless piece of paper.  Even though we had every reason to expect it, the hurt was palatable.  My sons, still too young to know what was going on were told…“Marriage is not for you”.

The Utah cases are different even than ours, however.  While we married under the auspices of a renegade mayor playing out his own version of civil disobedience, the couples in Utah were not.  They were married with the full assurances of both the court system and the state.

They were given the full “green light” to allow all their family hopes, dreams and aspirations to come out and be realized.  That is no small feat.  The Massachusetts Supreme Court observed that marriage is one of the single most important acts of self-definition.  These couples did not take their steps lightly, and these were not rash, impulsive decisions.  They have been in wait, in hope, and probably prayer that someday they would meet fruition.

That day came.  Now the state wants to say, “Never mind.  Put your heart away, pack away your soul.  Uncry your tears of joy, return your smiles to moth balls.  We are rewinding the most important acts of your lives.  Marriage is not for you.”

No.  This is not acceptable.  In the history of unacceptable things, this is at the top.  Our legal system and American ideals are founded on a core ideal that we do what we committed to do.  Utah committed to these couples and they owe the recognition to them.

Marriage IS for them as much, if not more, than anyone.  They were told they could.  They went through the personal life changing process to do it, and they have earned the right to have it.   The recognition of their families cannot be unborn.

If the governor and his administration continue to renege on marriage for these couples, they should be sued for everything they are worth.  They owe over 1300 couples for the pain and disappointment they will have caused them.  I will never forget that profound wash of discouragement on the day we heard about our marriage.  That memory never goes away.  These couples should be compensated for the harm they have endured.

Heterosexuals in the blogsphere swarmed to an idea that marriage means being unselfish.  They embraced the concept that marriage is for the love, honor and cherishing of one’s spouse and the deep commitment to the well being of one’s current and future children.  This is exactly what the married same sex couples in the state of Utah have signed up for, and yes, marriage is and should be for them. They are exactly the ones who deserve it.  They personify all the good values for which marriage stands.

Governor, it should not be, it cannot be, yours to withhold.  Give it back now.