This is a guest blog by our friend “JC” who lives in Nigeria.  He is gay, but hidden.  He stays to create change within his country.  Here is part one of two.  This is his message to the people of Nigeria.  Part two is here. 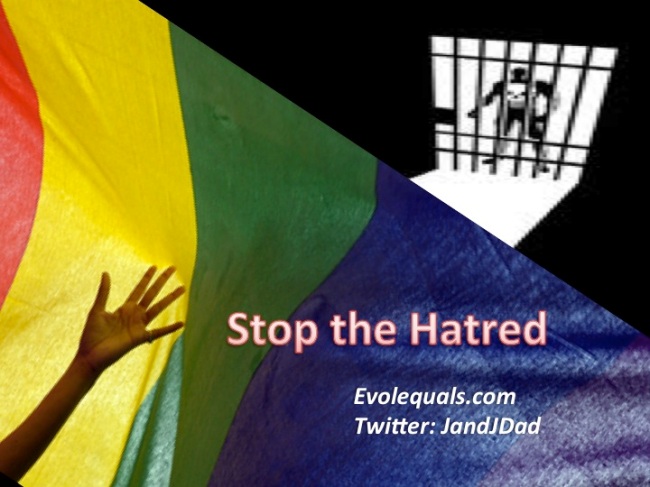 In the last few weeks or so, one subject has been on the lips of a large swathe of the Nigerian population. Everyone has an opinion on this subject, everyone is eager to thrust forth his opinion strongly especially if they happen to hold identical views with the majority of the populace. About two week ago, President Goodluck Jonathan signed the same – sex marriage prohibition bill into law, the bill had previously made its way through Nigeria’s upper and lower legislative houses, all the while egged on by the Nigerian populace at the behest of various religious bodies. I shall not bother to go into the minute details of this law as it is safe to assume that you the reader must by now have critically examined this obnoxious piece of legislation.

I shall now proceed to illustrate that this law is borne out of nothing but blind bigotry as well as an intention to hoodwink a gullible populace held captive not physically, but intellectually and mentally by a consortium of fake religious leaders and a political leadership which is morally bankrupt. Both parties in this consortium draw tremendous mutual support from each other as well as reinforce each other’s stranglehold on Nigeria’s collective jugular. You see, this consortium has had the unbelievably good fortune of being planted in a richly blessed land which is populated by a very gullible and easily manipulated populace, a populace that is very eager to lap up whatever information is fed to it however bigoted and however hate – filled it happens to be. In a bid to divert attention away from pressing issues which threaten our very lives and the wellbeing of the nation, issues such as an insurgency in the North which has rapidly spread out of control as well as unpredictable security situations across the rest of the country, widespread poverty, a alarmingly high rate of youth unemployment, infrastructure in a disgraceful state of disrepair, corruption in high and low places etc, some very smart Alec devoted valuable legislative time and resources to come up with the ‘bright’ idea of a ‘jail (perhaps kill) the gays bill’.

This bill sped through both legislative houses with admirable efficiency of the sort to be found in more advanced climes. Simultaneously, the other part of the consortium composed of the religious bodies played its own crucial part in a well choreographed scheme by screaming from their ‘holier than thou’ perch that gays are demonic devilish, evil, possessed, cruel, devious, deserving of death (perhaps at the hands of all holy straight persons), undeserving of love, unchristian, unafrican, inhuman, etc. like a well rehearsed script, the brainwashed, gullible populace has taken up the chant echoing the same words of bigotry and blind unreasoning hate with which they have been repeatedly fed.

In the process, certain facts are conveniently glossed over: Christianity and Islam on which the bigots base their claims that homosexuality is contrary to religion, are both actually alien to African culture having been imported as tools of domination and subjugation, nevertheless, both religions preach love in its truest sense as exemplified by Christ’s admonition to the adulterous woman to “go and sin no more”, the book of Leviticus; another pillar upon which misguided bigots rely upon in advocating hatred against other individuals solely on the basis of their sexual orientation and regardless of any other criteria also contains several other prohibited activities. These other prohibitions are routinely flouted yet the “devoutly religious” people of Nigeria raise not a single eyebrow.

In recent times, it is almost impossible to miss the massive and mind – boggling outpouring of hatred and venom directed at gays (including lesbians to a markedly lesser extent) in Nigeria. As a gay man, following all the comments and posts on blogs and other social media as well as radio and TV broadcasts. I have repeatedly asked “what on God’s Earth could we possibly have done to deserve so much hatred and be the subject of so many malicious lies?” I cower deep in my closet where I can nevertheless hear the hate filled comments such as: “no one is born gay, it is a bad and evil habit learned at a young age and which if not beaten or whipped out of a child, leads him into full blown homosexuality by the time he’s in his teens and twenties”.

That gays deliberately target children and lure them into homosexuality as homosexuality and pedophilia are very similar and often indistinguishable.” “that gays belong to some demonic shadowy cult hence their preference for same sex intercourse.” I cringe each time I hear these lies, I burn with deep shame that I am forced to share the same nationality with purveyors of such monstrous lies as I struggle to wrap my mind around how human beings can perpetuate such malicious falsehood against otherwise bonafide members of society solely on account of sexuality; a thing beyond human control.

As a child, I was strongly aware, even before I could grasp the full meaning of sexuality or romantic feelings, that I was attracted to men. Contrary to what the liars say, I was never molested or induced in any way by any man. I simply followed my inner feelings like every other human being. As I grew into my pre – teen and early teens, my sex drive like that of every other child of a similar age, sharpened. The only difference was that with me as with other gay men, I was drawn to men.

To put it more simply: the same way you (the straight man) grew into the realization that you are straight and therefore attracted physically to the opposite sex is exactly the same way a gay person grows into the realization that he is attracted to the same sex. Just like you did not consciously choose to be straight, I also did not elect to be gay; and please don’t even start with the tired and idiotic argument that perhaps I was the victim of some form of demonic or spiritual attack which has somehow distorted my sexuality.

If you still believe that sort of crap, then I suggest you stop reading this and rejoin the hordes of hate – filled homophobes who are daily writing in their names in the register of history’s hall of shame.

This entry was posted in Prejudice and tagged anti-gay africa, Jail the devils, JC, Nigeria, religious bigotry in Africa. Bookmark the permalink.