My Open Letter to the Two Gay Dads, Parents to One of the Most Special Boys in the World 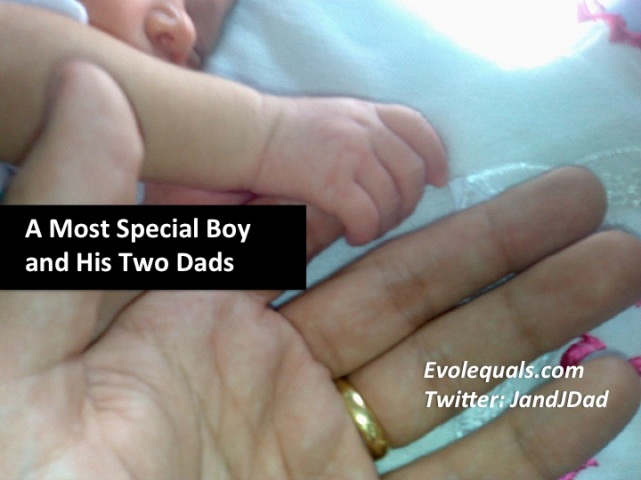 It all started with a haircut. Chad, a 22 year old young man, not out about his sexuality, got into Wayne’s chair at a salon. After discovering a sincere enjoyment of each other, they went on a date a week later. Over the course of a year, they realized their slow moving relationship had built into something very solid between them. At the time, they had no idea how solid it was going to have to be.

Others noticed their mutual devotion. In 1999, Wayne’s grandmother was the one who popped the question. “When are you two getting married?” she asked them. They politely explained that same sex marriage was not legal and Grandma gave them a look they will never forget. “She looked at us like we were a dumb as a sack of potatoes,” says Chad, “She asked us if we loved each other, and we said yes, so she asked again ‘So then when are you getting married?’” It was a wake up call for the couple. They had as they call it, their “aha” moment. It was not what was legal that was important in building a family. It was the love. A few years later, they would take this lesson further by demonstrating that family is not doing only what was required, but doing what is mandated by their hearts.

Wayne and Chad married three years before it was recognized in Canada. Wayne had always wanted to be a father as well, and one Christmas, he made a proposal to Chad. “We have a great life now, but it is time to grow. Do we want to be doing just the same thing in ten years? I want to share new challenges and adventures in life with you.” The proposition resonated with Chad.

Many would deny gay men the opportunity to be parents because they cannot biologically create children on their own. For Wayne and Chad, the ability to inadvertently procreate was not a negative. They found themselves enthused where others had a sense of resignation and defeat. “As a gay couple, adoption was our version of pregnancy from an excitement point of view.  For the straight couples we met, it was the final step in a difficult journey of infertility.  When we took our adoption classes (in Canada you have to take mandatory classes in order to qualify for adoption) we were on cloud 9 which was a noticeably different head space than most the other couples in the classes.”

Their happiness seemed to be fulfilled when a beautiful baby boy was born, and they named him Grayson. There were problems right away and they were informed that Grayson would require open-heart surgery, on which they signed off immediately. Four hours after the surgery, the men were informed of another issue. It had become apparent to the medical professionals that Grayson suffered from a potentially lethal disease called Maple Syrup Urine Disease (MSUD). MSUD patients are missing an enzyme to safely breakdown leucine (an amino acid in protein).  Without that breakdown, and by taking in too much protein on any given day, they suffer immediate and irreversible brain damage. When they were informed of Grayson’s condition, Wayne and Chad did not know whether or not Grayson’s brain had already been damaged. Wayne states, “It was for me perhaps one of the worst moments of my life. That moment was numbing, paralyzing.” They were told that they could back out of the adoption if they wanted to, and no one would judge them.

But, all they could think was, “If not us, then who?” They loved Grayson, and cared about him for four days. They had signed off and worried through life saving surgery. If they were intimidated away, certainly no one else was going to step in. Still they found resolve in the fact that they undertook their future life with a conscious decision. Chad states, “We actively chose our path. Birth parents in our situation do not get to choose.”

While taking ownership over their choice, it is readily apparent that the love within them was a compelling driver to what they had to do. They have received many well-intentioned sentiments, but due to the constant and intense challenges, some comments were inaccurately hollow. “We had a lot of people tell us Hallmark-like things like ‘Life only gives you want you can handle’.  I’m sure these types of statements make that person feel good, but it made us feel like crap as it seemed like this was way more that could handle at the time,” shares Chad.

The couple has made it a mission to reach out about MSUD and fight the disease. They have contacted celebrities, groups, and magazines — anyone who could help. One group has stepped forward more than any other. Wayne states, “It has been the gay community that has consistently reached back to help us move forward. That’s not to say we haven’t had the support of many, many others, but it is “our” community that seems to be the most willing to speak up and use their voice to help us and our son.” If not us, then who?

Grayson will never be “out of the woods”, but his dads, on a daily basis, keep him safe.  “We have a new heightened level of stress that we live in, all day, every day.  However, as Grayson’s blood is analyzed every week, they know down to the molecule if he has enough hydration, sodium, amino acids etc. Those results are then sent to his dietician and doctor who recalculate his meal plan.  The end result is that Grayson is almost bionic as he has the perfect intake a child his height/weight/activity level should have.  So we seem him as healthy, which he is.  It’s just his risks when he is unhealthy are extreme so we walk a fine line of health,” they report.

Their life goes on.  “Grayson has taught us to be present, to enjoy what we have today as it’s too stressful to think about the future. He has actively participated as the featured story/child in numerous fundraising campaigns, telethons and charity events.  We hope that a side benefit of this involvement is that it will help empower him, as he will see himself as a key player in helping the hospital, instead of just being an ongoing patient there.”

Grayson is growing to be the son of his dads. Grayson has made them laugh harder and smile longer. He is exceptionally brave and kind hearted.  He is social, funny and intuitive. Dad Wayne taught him to say greetings with a British accent which enhance his already insurmountable charm. Recently Grayson did a photo shoot with the mascot for a local Children’s hospital. He has loved the mascot for a while and was thrilled over the idea of being able to hang out with him.  Much to his dads’ surprise, instead of wanting to go off and play with the mascot alone, Grayson instead took the mascot’s hand and asked if they could go visit the other kids in the hospital.  He needed to take entertainment to the kids who needed it. If not Grayson, then who? That’s the kind of kid Grayson is growing up to be.

Here is my letter to Grayson’s dads:

I don’t think that in the history of parenting that there has been a group so disparaged as much as gay dads. It used to be that the concept was so foreign and so vilified that all the religious right had to do in order to drive homophobic fear into the hears of their constituents was to show them a picture of two men pushing a baby carriage.

Yet, in spite of such vilification men like you, and me, persevered. We had a love within that persisted and we knew there would be a child, or children, who deserved it. Over the time of knowing that was who I am, and fighting ignorance, I have met many incredible LGBT parents. The two of you are among the finest of them, and of any straight parents I have ever encountered either, for that matter.

I am proud to identify with you. Even though I cannot pretend to understand all you have been through, I am proud to be a gay man as you are, a father, and one who is ready to advocate and fight on behalf of a child, my child. There are children in need in this world, and many LGBT parents who are ready and willing to be there for them. A recent study speculated in fact that if all the LGBT couples who wanted to foster/adopt kids were allowed to, we would deplete the US system of kids in need. What a nice shortage for a society to have.

He is of the most special boys in the world because he has you, the most special of parents. He has dads who are two ordinary men who have stepped up to do an extraordinary thing. Two men who discovered, as was said to you, “You never know how strong you are until being strong is the only choice you have.” Because of you, Grayson is more than a boy with a disease, he is blessed.

He is not alone. We are all blessed for knowing you and seeing of what a family is capable. You live one day at a time, and it has got to be draining. You have shown us a better vision of what it means to be dads and parents. You have made the world a better place.

If not you, then who? It needs to be all of us.

6 Responses to My Open Letter to the Two Gay Dads, Parents to One of the Most Special Boys in the World