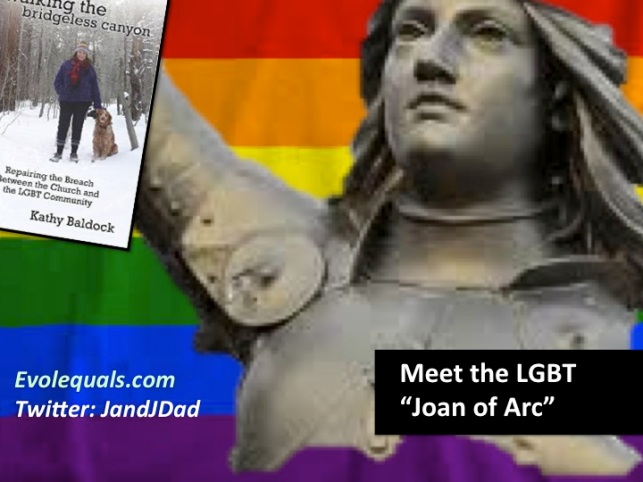 My first interaction with Kathy Baldock, the founder and director of Canyon Walker Connections, was in 2012.  She had shared information on line about the newly formed Restored Hope Network and its new leader, Robert Gagnon. I had just completed some advocacy for California’s new law protecting minors from “reparative therapy” and was writing about this new and threatening group. I fought them from behind my keyboard. Kathy, on the other hand was arguing with them live in the same room with them.

We both, it appeared to me, to be seasoned advocates doing our part in the battle for equality. It was not until I picked up Kathy’s new book, Walking the Bridgeless Canyon, that I realized we had come to our current missions from very different places.

By 1988, I had lost over forty friends to AIDS. I had spoken at a dozen memorials of very close friends. I was only thirty one years old.  In Bridgeless Canyon,  Kathy shares where she was at that time: “My husband and I were walking into our home as the phone rang…I understood that one of his friends in New York City had died of the ‘gay cancer.’ My reaction was dispassionate… I distinctly recall formulating judgments: People who died from AIDS got it by having gay sex… the death was foreseeable and could and should have been avoided by not following lust-filled desires. I am not proud of my behavior.”

Kathy describes that her own life also did not fit her matter-of-fact conservative world view.  Beyond her expectations, she was soon facing unexpected betrayals and divorce. She told me, “My faith did not change, but life as it was supposed to be as a result of that faith, sure did.” Kathy started to walk, both physically and spiritually as a result of this personal upheaval. It was on one of these walks that a life-altering relationship happened.

Kathy regularly passed a woman who walked in the opposite direction on the canyon trail. She was a woman who reflected a whole different life experience than the one Kathy knew. Kathy sensed the woman was a lesbian. One day, Kathy heard herself call out to the other woman, “Can I turn around and walk with you?”

As they walked, Kathy was no longer in a place where she felt she needed to “save a soul,” she was in a place where she was willing to just be.  The walk ended, but it became a regular ritual with the two women.  Through her new friend Netto, Kathy met more LGBT community members, allowing her to see the human faces over her dogmatic beliefs. It wasn’t until she heard a Netto’s heartfelt admission that Kathy’s previous misconceptions hit a crisis point from which they would never recover. Netto admitted that she could not feel safe in the places where Kathy frequented, and with the people Kathy knew. “Look Kathy, you don’t understand. In this society, I’m the lowest of the low. I am a Native American. I am a woman of color. I have a Hispanic last name. I am lesbian. Not even God loves me.”

The words “not even God loves me” shot through Kathy like a lightening bolt. “My heart ached; I stopped on the trail stupefied, and cried.”  She had broken through the powerful truth that happens when regressive Christian dogma meets an actual living breathing LGBT person — the dogma falls apart. 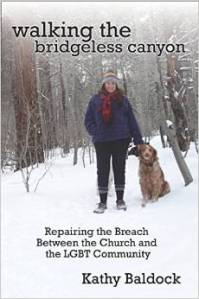 In Bridgeless Canyon, Kathy shares many more stories of other Christians who were led to challenge prejudices after they got to know LGBT individuals in their lives. The purpose of the book, which took over a decade to write, was to compile the ultimate text book for such people from the history and culture of the LGBT movement, the religious/political evolutions, the scientific facts of homosexuality, and what the Bible really says about homosexuality, which, in reality, is virtually nothing at all.

The final portion of the book dives deep into the relationship of LGBT Christians and their allies. One of Kathy’s key objectives is to fling open the closed gates of Christianity and make it accessible to LGBT people who want it, and make it friendly to those who have endured its horrific abuses. She lays out key issues for Christians to be aware of in respecting their LGBT neighbors which include not recognizing that the person already HAS a “journey with Jesus”, not needing encouragement to get one, and the person needs their own testimony to be respected and heard, where today it is dismissed out of hand (“You couldn’t have been ‘born gay’— I don’t believe that…”).

“This is the book I wish had been available to me a decade ago,” she states.

Most Christians who are anti-gay will not likely change through biblical study alone, she admits. “I think I have only met one individual who has done that by simply reading the Bible without knowing a gay person or hearing real life testimony,” Kathy told me.

As a modern day pro-LGBT Joan of Arc, a majority of Kathy Baldock’s advocacy is not from behind a computer screen. It is in face to face meetings, and confrontations, with the most rabid anti-gay ministers in the American evangelical movement.  She has personally interacted with vehement anti-gays including Michael Brown, Robert Gagnon, Anne Paulk, and Scott Lively. She has sat with street preachers and shared with them her version of “the message.” She has attended “ex-gay” recruitment sessions. She has been stalked online and then gone to the church where her stalker worked in order to confront him.

Most recently, she smuggled a gay man into the church of the notorious Steven  “execute the gays” Anderson who weeks before declared that there would NEVER be a gay person in his church. Courtesy of Ms. Baldock, that resolve has been violated.  Posing as a couple, Kathy and her gay male friend attended a recent service.

Of her visit, she reports an anti-education, woman- suppressing environment. Most disturbing is her account of the church’s violent undertones. She states, “I’ve been to many, many churches, yet, before attending Faithful Word, I’ve never visited a church with such a high visibility of guns on hips. Anderson transformed a sermon on Psalm 23 into a call to husbands to keep their families secure with a gun, a shotgun, or, at minimum, a metal bat and good fighting skills until the man of the home could afford a good gun. Before Sunday, I had never been met at a church door by a greeter packing a gun or witnessed the pastor proudly flashing his gun underneath his suit jacket. It is an unsettling feeling to experience in a church, a place I equate with sanctuary.”

Kathy’s prognosis regarding the hold pastors like Anderson have on American Christianity is not a good one.  “Unfortunately the list of Christians with literal, fear-inspired theology seems endless. Aside from the ugly street screamers, I’ve personally experienced interaction/meeting many who, in their zeal, are convinced they are flawless in their biblical interpretations and speak for God while doing significant damage to the emotional, physical and spiritual well-being of the LGBT community.”

This makes her book all the more important. This year, it should be a gift under the tree of thinking Christians everywhere. Where there is misinformation, the book brings knowledge and where LGBT people are invisible, it creates faces.

We cannot sit by and be complacent in this society, particularly one that is armed to the teeth. We cannot afford to be comfortable in our own sides of the canyon oblivious to all others. Kathy is courageous and right to walk it and create communication that inspires understanding, acceptance and common ground. 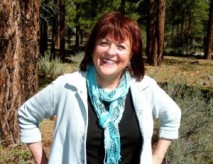 She is wrong about one thing, however.  The canyon is no longer bridgeless.

The bridge is her.

Autographed copies of the book Walking the Bridgeless Canyon can be found here.    Kindle and hard copy on Amazon.com.