A Gay Dad’s Open Letter to the Christian Billboard Couple: Get Your Homophobic Messaging Out of the Faces of Our LGBT Kids 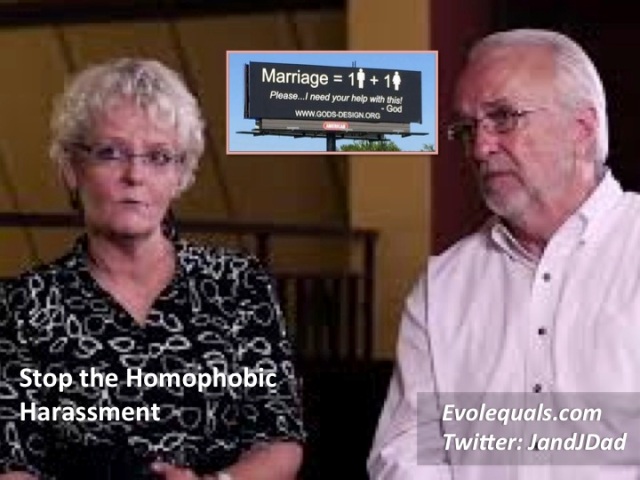 Two years ago Richard and Betty Odgaard humiliated a gay couple. After a long tour of the Görtz Haus in Grimes, Iowa, Lee Stafford and Jared Ellers were informed that they would not be welcomed to engage the establishment for their wedding because they were gay.

The Odgaards are now out of the wedding business, but they are not out of the gay couple shaming business. Their new venture is “God’s Original Design Ministry.” Its sole purpose seems to be to be as intrusive as possible promoting marriage and family inequality.

Their initial offering is a poorly designed billboard declaring marriage to be 1 male restroom icon plus 1 female restroom icon equals marriage. It is also tagged with a desperate plea “from God” for help with this concept.

Their goal is another 999 billboards to be placed around the country. They also hope that supporters will print and distribute a number of fliers. Per their website, these fliers are for followers to “distribute and post throughout your community” and to “place a flier on every windshield in your church parking lot next Sunday.”

The Odgaards have also been placed on Ted Cruz’s Iowa leadership team. Apparently he was concerned that he was appearing too LGBT friendly. That is not a problem now, Mr. Cruz.

I decided to write to the billboard wielding team.

I can appreciate that you are probably one of the most frustrated and angry couples on the planet right now. You were foiled in your dream to make your charming business exclusionary, and found out the hard way that homophobia is not a viable marketing concept. Then to make matters worse, courts around the country who absorbed a library of the most thought out legal and ethical arguments determined that the types of marriages you abhor are in fact viable, legitimate and societally relevant.

It is understandable that you are in a mood to strike back. It is apparent however, that your hunger for revenge has clouded any sense of spiritual or religious principle you might have. Your current behavior needs to be re-thought. A lot.

Your vision is 999 billboards. I guess the irony of an inverted “mark of the beast” has not hit home with you yet. I love getting subtle messages from God, and in my opinion, He is sending you one.

I guess that speaks to the core of this issue and your behavior. Who exactly gets to speak for God? While I think He may be wishing you to stop your current plans as they inadvertently play dangerously close to the devilish “666”, I have no right to put that opinion on a billboard and rub your faces in it. I also have the humility to admit that no Divine Revelation has mandated my view. It comes from my own sense of Christian principles.

Those principles also center around the “do unto others as you would have them do unto you” concept. You are not treating LGBT families in any way close to how you yourselves expect or want to be treated.

You would not want to arrive at your car and find it stickered with a sign that says “the Odegaards Aren’t Really Married”. You would not want your grandkids to be subjected to billboards that said “Hey Odegaards, you are just one big mistake. Love God”.

So why do you seek to humiliate my kids that way? Why do you hope that a bullied, closeted LGBT teen sees your call for privilege which will send them further into feeling isolated and unwanted?

Your behavior reminds me of a Christian school I interviewed of which I might potentially send my sons. I let them know that we were an LGBT family and asked if that would be an issue. The administrator puffed up proudly as he stated, “Well, no, it is not an issue for us. It might be an issue for you, however, because as we tell those coming from divorced families, we do not believe that theirs is God’s best design of a family.”

I was happy to leave him in his delusion of speaking for God. As I thought about it later, I realized how profoundly wrong he was. My sons were both born to drug addicted birth parents. They would be dead if we had not come together as a family. Through their 12 plus years as my kids, the one thing I know with absolute certainty is that destiny, God, the Universe, meant for these two beings to be MY sons. While I believe in God, I cannot prove that He exists, so I extend faith. My family is different, I not only know we “exist”, our bond of who we are is imprinted on my soul.

Tim Rymel , in his article “What does Ex-Gay” Really Mean,” discusses one of the few passages in the Bible that has been perceived as anti-gay. He observes “In 1946, the Greek word arsenokoites was first translated in the Bible to mean homosexual. Until that time, it had been translated to mean “an abuser of mankind” or to “defile one’s self with mankind” in the King James Bible. “

It is ironic. I know of no LGBT families that are “abusers of mankind.” None.

With your latest project, however, that is exactly what you are.

A single gay dad who cares. His story can be read here: http://www.imagaysingleparent.com/2013/02/02/rob/ and here: http://www.huffingtonpost.com/2014/01/31/rob-watson-gay-family_n_4689661.html
View all posts by robw77 →
This entry was posted in Bible, Family, Hatred, Marriage equality, Politics, Prejudice, Religion and tagged homophobia, LGBT families. Bookmark the permalink.

15 Responses to A Gay Dad’s Open Letter to the Christian Billboard Couple: Get Your Homophobic Messaging Out of the Faces of Our LGBT Kids