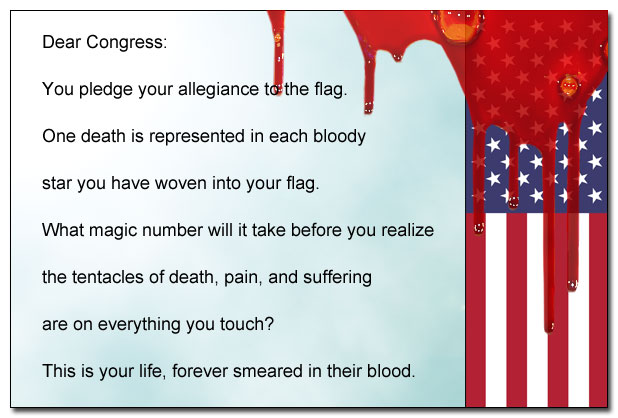 Thirty thousand plus and rising.

How many more will lose their lives?
What is the magic number?
When do you stop craving their gun money?

14 dead, 22 wounded in San Bernardino, California
I want to know, how much money did you earn with that one?

3 dead, 9 injured in Colorado Springs, Colorado.
What did you bargain for their death?

9 dead, 9 injured in Roseburg, Oregon
That holiday trip where you sat sipping bloody Marys, was it worth the cost of nine lives?

5 dead, 3 wounded in Chattanooga, Tennessee
The bloody steak in that restaurant must have been five stars for the five dead.

9 dead in Charleston, South Carolina
You dressed to the nines in your tailored silk suit, while they were being dressed in their best at the morgue.

27 killed, one injured in Newtown, Connecticut
We thought surely this would move you, but the blood of our babies bought you a fancier, blood-red car.

The list of the dead goes on and on.

And now the deadliest killing yet, 50 are dead and so many more injured in Orlando
You pledge your allegiance to the flag. One death is represented in each bloody star you have woven into your flag.

What magic number will it take before you realize
the tentacles of death, pain, and suffering
are on everything you touch?

This is your life, forever smeared in their blood.

I am an outspoken straight ally and feminist Christian. I also speak out against the abuses of churches and religions.
View all posts by Ono Kono →
This entry was posted in Corruption, gun control/guns, Hatred, News, Politics, Violence and tagged corrupt congress, Corruption, gun control lobby, lobbyists, mass killing, NRA, shootings. Bookmark the permalink.

13 Responses to Dear Congress, thirty thousand plus and rising