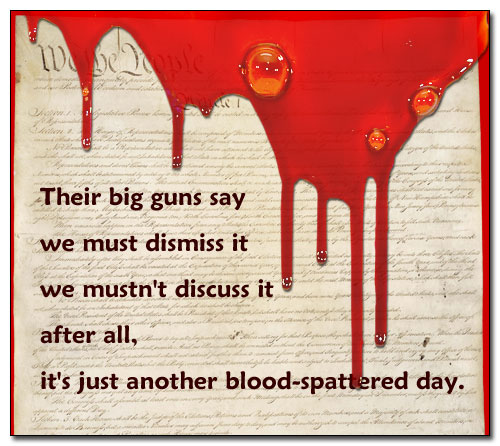 It took only one week past the last massacre
before the NRA stopped their silence.
Their big guns say
we must dismiss it
we mustn’t discuss it
after all,
it’s just another blood-spattered day.

Every lawmaker must see the imagery
of our expressionless babies surrounded by oceans of blood.
Every lawmaker must have dreams
of wounded bodies shrieking with terror into the night.
Every lawmaker must look
into the open gaping wounds,
bones twisted,
shattered,
and hearts exploded.
Lawmakers must be forced to look at their blood-stained hands
Until the dead invade their dreams,
with blood-soaked nightmares
echoing the shrieks of their victims every night.

Until they look at all 31,000 images of death.
Until they realize the loss reverberates
in the hearts of hundreds of thousands more
Until they can feel the grief
of the mothers, and fathers,
the sisters, and brothers,
the sons, and daughters,
the husbands, and wives,
and all the friends,
until lawmakers can feel the pain of grief coming from the living.

Don’t let them forget
as they have in the past.
Let us rub their noses in it
each and every day.

Harry Reid (D-Nev.)  Voted “no” for a procedural move to preserve option to reintroduce the bill, which is a good move to help bring this back as a bill.

The Senators who voted against the bill. This is dedicated to you. Their blood is on your hands.

I am an outspoken straight ally and feminist Christian. I also speak out against the abuses of churches and religions.
View all posts by Ono Kono →
This entry was posted in Corruption, gun control/guns, Hatred, News, Politics, Violence and tagged blood on their hands, congress, gun violence, inaction, lawmakers, NRA, senate. Bookmark the permalink.

1 Response to Until Gun Laws Change, Make Them See