The Homosexuality Question, Answered: Not A Sin

“God DOES state that homosexuality is DETESTABLE” 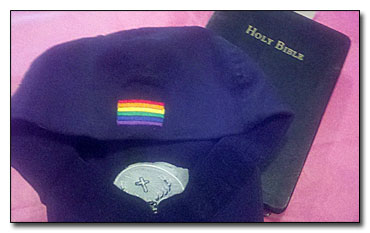 I read those words today on my computer screen within a comment that mostly centered on talking up how loving the commenter actually was. “It’s not ME who hates fags, it’s GOD!” so, so many Christian believers say, in a bewildering variety of verbiage.

Not so fast, lady. Here was my response:

Let’s take a look at these, shall we?

Genesis 19:1-5, in which the townspeople of Sodom want to “know” the angels. First of all, rape is not equal to homosexuality. Rape is equal to violence, domination, control, and humiliation. Second, Sodom’s fate had already been decided at the time these angels were in town. Ezekiel tells us the real reason: “‘Now this was the sin of your sister Sodom: She and her daughters were arrogant, overfed and unconcerned; they did not help the poor and needy. They were haughty and did detestable things before me. Therefore I did away with them as you have seen. Ezekiel 16:49-50 (NIV) The “detestable things” are further explained in Hebrew sources as a whole laundry list of cruelties to strangers, and toward anyone displaying compassion for another. Much killing and maiming is described.

This is most probably the place where you think that God said homosexuality is detestable, but there are several problems with that. First off, the prohibitions in Leviticus are specifically for the Levites, not everyone. Second, Jews decided a long time ago that all of them had a little Levite in them and have been following these rules, but not like you’d think. In Greek times, many Hellenized Jews participated in the Greek system of pederasty. But instead of having anal sex, they had intercrural intercourse (between the closed legs). In modern times, many loving gay Jewish couples only explore their love orally. In other words, God doesn’t hate homosexuality, just butt-sex, and then only if you’re a Levite. Third, who listens to Leviticus anyway? Certainly not Christians! How many anti-immigration “fencers” do you think are Christian? Considering the rhetoric I’ve heard from that side of that political issue, I’d think a whole lot. Yet, in between two of the most (in)famous passages in the bible, there is this little gem: Leviticus 19:34 “The foreigner residing among you must be treated as your native-born. Love them as yourself, for you were foreigners in Egypt. I am the Lord your God.” This isn’t some dumb restriction on blended fabrics or shellfish. This is about being kind to strangers, a Jesus-approved sentiment. Yet many Christians still cannot follow this tenet. Why should we pay attention to Leviticus while you yourselves seem to feel quite free to ignore it? EVEN when the N.T. backs it up??

1 Corinthians 6:9-10 (NAS) “Or do you not know that the unrighteous shall not inherit the kingdom of God? Do not be deceived; neither fornicators, nor idolaters, nor adulterers, nor effeminate, nor homosexuals, nor thieves, nor the covetous, nor drunkards, nor revilers, nor swindlers, shall inherit the kingdom of God.
1 Timothy 1:9-10 (NKJ) “Knowing this, that the law is not made for a righteous person, but for the lawless and insubordinate, for the ungodly and for sinners, for unholy and profane, for murderers of fathers and murderers of mothers, for manslayers, for fornicators, for sodomites, for kidnappers, for liars, for perjurers, and if there is any other thing that is contrary to sound doctrine.”

The word that was translated in these two passages as “homosexual” and “sodomite” is arsenokoitais. It is a slang term used in the bible only in these two places. Here’s what Paul R. Johnson wrote about this word, for “Second Stone” magazine titled “A New Look at Arsenokoitais” (1994 January/February issue):

“The Greek compound term arseno-koitais literally means ‘the male who has many beds’. The word arsen means ‘male’, the adjective o means ‘the’, and the term koitais is defined as ‘many beds’. Thus, the entire phrase means a male with multiple bed-partners; a promiscuous man. Everywhere that the word koitais is used in the plural in the Bible denotes promiscuity. However, when the same word is used in the singular form, the Bible gives approval because the singular denotes monogamy.”

In other words, God’s not keen on male sluts.

“Because of this, God gave them over to shameful lusts. Even their women exchanged natural sexual relations for unnatural ones. In the same way the men also abandoned natural relations with women and were inflamed with lust for one another. Men committed shameful acts with other men, and received in themselves the due penalty for their error.”

Once again, there are several considerations here. First off, this extensive description of behaviors contained in the entire 10 lines is the SYMPTOMS of idol worship. Second, you should note that the women “EXCHANGED natural sexual relations for unnatural ones” and the men “In the same way the men also ABANDONED natural relations with women and were inflamed with lust for one another. In other words, the idol worshipers WERE STRAIGHT. Third, Romans 2 offers you up some pretty stiff penalty for getting all judgey after reading Romans 1: Romans 2:1-4:

“You, therefore, have no excuse, you who pass judgment on someone else, for at whatever point you judge another, you are condemning yourself, because you who pass judgment do the same things. Now we know that God’s judgment against those who do such things is based on truth. So when you, a mere human being, pass judgment on them and yet do the same things, do you think you will escape God’s judgment? Or do you show contempt for the riches of his kindness, forbearance and patience, not realizing that God’s kindness is intended to lead you to repentance?”

This is pretty much everything the bible has to say about gay stuff, and as I just showed, it’s all refutable. You’re actually on much firmer ground (excuse the pun) if you believe based on the Bible that the world is flat, as there are over 75 passages in both testaments describing the earth as flat, fixed, or at the center of the universe. Go figure.

EDIT 8/21/21: I should’ve done this earlier, but I should attribute Matthew Vines as a reference for this blog post. I didn’t actually re-watch his speech The Gay Debate: The Bible and Homosexuality when I answered this person in a comment and inadvertently wrote my first blog post. I did it from memory, and a few additional references on-the-fly. But the effort I made WAS essentially a re-hash of his awesome speech, and he should be credited.

Part II:  Jesus DID Say Something

Part III: Pro-Marriage Equality…Because the Bible Tells Me So?

Just a domesticated housemonkey with too much time to think about stuff.
View all posts by thomsense →
This entry was posted in Bible, Clobber Passages, Living, Politics, Prejudice, Religion and tagged 1 Corinthians 6:9-10, 1 Timothy 1:9-10, arsenokoitais, Bible, gay, homosexuality, Leviticus 18:21, Sodom. Bookmark the permalink.

115 Responses to The Homosexuality Question, Answered: Not A Sin