Jeffrey C. Sherman is a writer, producer, director and composer for film and television. 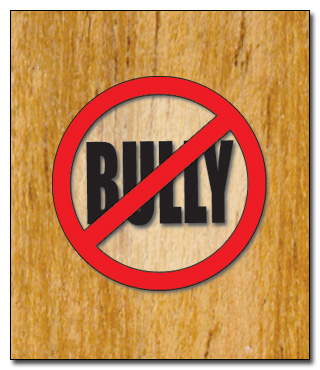 From Wikipedia: “An older term within the U.S. Government, a bully pulpit is a public office or other position of authority of sufficiently high rank that provides the holder with an opportunity to speak out and be listened to on any matter. The bully pulpit can bring issues to the forefront that were not initially in debate, due to the office’s stature and publicity…”

It goes on to say that the term was coined by Teddy Roosevelt who meant the “bully” as a good thing; a place from where good messages could be conveyed.

Here’s when I knew I couldn’t sit quietly about the 2012 Republican candidate — when I heard about young Mitt at school tackling a clearly gay classmate and cutting his long hair. You can look up the article and I KNOW, my Republican FB friends are already typing in why “trashing” news stories come up on both sides in an election year. I get that, but even ol’ Mitty couldn’t dispel this one, could only just shrug it off a youthful antics or something.

I was bullied as a kid. For years. I was bullied because I was a big kid, sometimes a bit chubby and I was raised not to raise my hands to another kid. So, when my schoolyard bully in second or third grade was looking for an easy mark, I was found.

It was a constant fear, every day that I went to school. This putz who was popular with the cooler kids at school, made a big deal of letting everyone know I was a “pussy” or a “fag” or a “loser” and that, after school, he would “find me and kick my ass.” I did nothing to this moron to bring this on, I was just trying to get through my childhood and through school and through an often rocky time at home. I won’t go into the latter, but suffice it to say, it was plenty hard enough being me without this cruel, ever-present shadow of fear and loathing.

This went on for years, all the way to high school. I would actually try to find alternative ways to sneak out of school EVERY day, another back route way, way out of my way, just to elude this jerk. I would try to enlist friends to walk with me, but they were either also scared of this bully or would turn on me and let him know where I’d be found. I was on my own.

Most of the time he would let me go if I submitted and lied on the ground crying and pleading — usually with guys and girls from my classes around. Some laughed, some wanted to help, but nobody did. He was too much of a menace.

The times I tried to ignore this creep or, stupidly, tried to fight back, I would come home with a bloody nose, a black eye or, if I got lucky, just with an exceptionally low self esteem. I wanted to disappear. Being a kid is really hard enough without the terror and the pain and embarrassment. I wasn’t then and have never been a fighter. I didn’t want to and I could muster it.

My Dad, a WWII veteran and war hero told me I had to learn self-defense. We spent days training together and I thought I could pull it off. My Dad taught me that, when everything else failed, I should take the heel of my hand and jam it up into his nose and it would drive the bones and cartilage up into his brain and it would kill him. My Dad, god bless him, was pissed and felt helpless, but I kept thinking I don’t want to kill the guy, I just want him to leave me alone.

So, prepped for battle, I decided one afternoon to just actually cross the playground from school in plain sight, go out the gate and walk home directly up Rexford to Lomitas, to Crescent Dr. Part of me thought, he’ll never even imagine I would go that route.

Of course, right across the street, at the corner where my friend — and his — Jon Gries lived, the goon spun me around, called me a “pussy faggot” and knocked my books and papers all over, as usual. Dad’s training clicked in and I squared off, balancing my body to spring and tucking my thumbs correctly in my fists and all that. And, as my fist thrust forward and only glanced him, he got a wholly scarier look in his eyes than I’d ever seen in the six years of abuse before this and… the rest was kind of hazy.

I stayed home from school for three days, had stitches on my lip and begged my parents to put me in a different school.

Instead, they went and reported it to the Principal and we were both called down to the office. In that waiting room, this guy stared me down and softly mocked me, “You’ve really done it now, you stupid asshole. Just wait.”

We got a stern talking to by the Principal who almost made me feel equally culpable. If anything like this happened again, he would…

All I could see or hear from this point was this bully casting me cold glances and hearing his eerie warning echo in my head, “Just wait.”

Though nothing happened the next two years until we graduated in eighth grade, he still gave me that look every time we passed in the halls. He taunted me verbally. Even in high school, I feared encountering this guy. I still lived in abject fear and still went out of my way to avoid him after school, just to get home without incident.

Even though it’s been years since this happened, the scared little boy inside me still surprises me and comes up at times when I need to stand my ground. It shakes me and sickens me. It’s a visceral, immediate feeling and — to this day — I can still feel victimized and vulnerable like a little scared boy at Hawthorne Elementary School.

I’m 55 now and, sometimes, he still comes out; the little grade school kid, the heart pounding in my ears, the heat on my face, the self loathing and victim dread, wanting to disappear and die. It would be easier.

The scars don’t go away. They just grow deeper with passing time.

I thought I might get past this all by contacting this fellow on Facebook. I wrote to him and told him that I still harbor these feelings, these fears and dreads. I told him that it would go a long way toward getting me past it — and I might actually even forgive him — if he could either suitably explain why he targeted me or, at least, if he said he was sorry.

He did write back and he said, basically, that he was shocked I felt this way, that he didn’t remember any of that and that he actually remembered us as being good friends. He said, if it ‘had’ happened, it was because he had a lousy childhood and might have been acting out.

I think, while we all learn and grow and become (hopefully) better people with age and experience, we are to a good degree the same people deep down that we always were.

Like Mitt Romney, there is no remorse, no accountability. It’s always someone else’s fault. No big deal.

I’m here to say it’s a very big deal. I can’t forgive my bully and I can’t forgive Mr. Romney for getting his jollies out of humiliating another human being to boost himself up. It speaks volumes to me. Our country cannot afford to have someone in the President’s post who ever found it in his fiber to treat a fellow human that way. Romney’s statements and plans and actions all smell of a big, far right money crony and a campus bully. I don’t and will never trust him.

He can smile, and mug and blab about how much he cares about America; about the common man. Mitt cares about Mitt, sweeping his past ‘antics’ on the school grounds and at Bain under the rug. This man is not in touch with the plight of his fellow man, he just wants to win and suck in more power than he already has.

I DON’T TRUST HIM.

He can tell me that corporations are people.

He can say anything he wants.

I DON’T TRUST HIM.

I trust a man who rose from nothing, who came out in favor of health care and gay marriage rights and women’s equality and immigrants’ nationalization. These basic truths are what set this country apart from so much of the rest of the world.

Together we are stronger. We’re a country that builds and connects, not separates.

If you’ve never been bullied, I envy you. If you have, I stand with you. People standing together, working together is the only way this world will keep spinning — at least with humans on it.

I am excited to see what Mr. Obama will do in the next four years when he doesn’t have to get re-elected and can move more powerfully as other two-term presidents have often done in the past. Without those considerations, I believe the true man or woman comes out in a public official.

I want to write more about what I think is missing from all these political discussions and will in a subsequent posting.

Be nice to people. As my wife Wendy says, “We are all one thing, separated by time.” So be nice to others and you’re being nice to yourself.

If we truly treated others as we would treat ourselves, all the world’s problems would be in the past.

xo to you all

Since attending U.C. Berkeley and graduating Magna Cum Laude from UCLA Film School, Jeff has written numerous features.  Among other notable accomplishments in television, Jeff created, produced and wrote one of the first Disney Channel series, “The Enchanted Musical Playhouse” which featured songs by his father and uncle, the Sherman Brothers .  With his cousin, Jeff directed and produced the 2009 Walt Disney Pictures feature documentary, “The boys: the Sherman Brothers’ story.” The theatrical film chronicles the unparalleled career of the sibling songwriting team while taking an intimate look at the brothers’ influences, differences and secret family rift. The film premiered at the 2009 San Francisco International Film Festival and has been selected for several major international festivals in Glasgow (Scotland), DocEdge (New Zealand), Shaw Festival (Toronto), Newport Beach (USA) and the Annecy International Animated Film Festival (France) the Animac Festival (Spain), the Melbourne International Film Festival (Australia) and the Biografilm Festival (Italy). “the boys” has screened at numerous Jewish film festivals including Los Angeles, San Diego, Ventura Country, Tucson, Las Vegas and St. Louis. In 2010, “the boys” was chosen as the opening night screening at the first-ever Disney D23 Expo. For more information, go to www.theboysdoc.com.
In 2011, Jeff produced, with John Landis, Traveling Light Partners’ original hour comedy special “Wendy Liebman: Taller on TV” which was picked up by Showtime.
Jeff lives in Los Angeles with his wife, comedian Wendy Liebman, and his two amazing sons, Alex and Ryan.