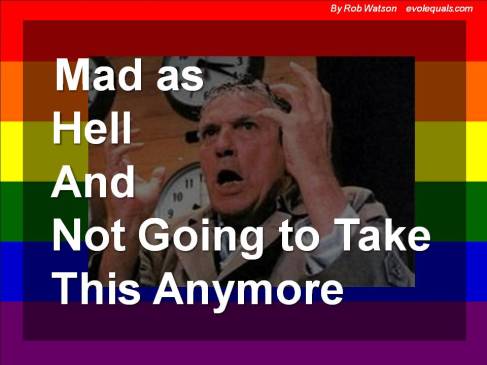 Today a blog piece by Kergan Edwards-Stout went viral.  It was a very simple but direct statement actually:  If you plan to vote for Romney and rob gay people of rights and dignity, de-friend me.  Like me, Kergan is a gay dad, and I think we tend to run on the same blogging bio-rhythm.  A month or so ago he beat me online with a well written piece to Rupert Everett just as I had written a piece with a similar sensibility.  The two were so aligned that when I read his, I found myself thinking, “wait…I haven’t posted this yet…”.

I am following his bio-rhythm again, as are thousands and thousands of LGBT people.  Max von Essen made a similar appeal.  The point is simple, and it is not new, and it is not even unique to us.  It is the point that Peter Finch made in the movie “Network”:  “We are human beings GOD DAMMIT, Our lives have value!   We are mad as hell and we are not going to take this anymore.”

Why are we mad?  Because for too long gay people in our society have been stripped of simple dignity and decency.  We have been denied all the things that we are supposed to deserve in a country based on “Life, Liberty and the Pursuit of Happiness”.  Our versions of  all three of those over-riding values, pales to the level realized by our heterosexual compatriots.

In case you don’t believe me, I have compiled a little list.  Not included on this list are the rights that we have been and are fighting for.  Those aren’t decencies… they are RIGHTS.  The fact that we have to fight for them is in itself an indecency.   I am not going to put that on this list, however.  You can have that one as the “starter indecency”.

So, here they are, in my opinion, from lesser to most heinous….  the ten biggest indecencies thrust on LGBT people:

10.  We are defined by some people,  not as humans, but as sex acts.  It is why the term “homosexual” is so grating.  It is often said as “homoSEXUAL” to really dig in the concept that gay people are ALL about sex.  Stripped from the perception of us is that we love, feel romantic and want to partner and bond as much as any heteroSEXUAL.  We are people, not sex acts.

9. We are prevented from due process and the ability to defend ourselves.  Our rights are voted upon and used as pawns by Republican strategists therefore we do not get forums to stand up and defend our lives and our dignity.  Early in this millennium,   the aggressive Republican attack  moved like a juggernaut in rural states, where there was no gay rights voice, stripping defenseless gay people of rights they had not even started to get assertive about.

8. Our relationships and futures are under constant uncertainty.   Romney seems intent on stripping gay families of the “benefit” to visit each other in hospitals under dire conditions.  North Carolina stripped gay families of the means to build foundations and protect themselves.  Republicans threaten to amend the Constitution and divorce a hundred thousand marriages, and to force gay military back into hiding.  Gay people face a tenuousness in life that no heterosexual can really imagine.

7.  We are not allowed to speak for ourselves.   Well, we are, but no one but us listens.   In order for gay people’s case to be heard, it has to be presented by a straight celebrity or ally.  Witness the pro-gay marriage ads without gay people in them.  Witness the commotion of a straight man pretending to be gay who had a coming out story.  Gay people do the same thing every day…without commotion.  Witness gay celebrities who become spokespeople after coming out because they still carry the reminiscence of having been perceived as straight (and the longer they are out, that credibility starts to wane).  We are people with lives, not people defined by “a lifestyle”.  If you want to know about our lives ask US, not someone else.

6. Our families are allowed to be demonized, or to be put under their own versions of “Don’t ask, don’t tell”.  What is the biggest argument against same sex marriage in state campaigns?  That children will have to be educated about gay families.  Here is the worst part about that argument—the pro-marriage side’s answer to that is “oh no, that isn’t true”.   Like hell it isn’t.  The real answer should be “we are a society, and there are different families in society, and your children need to both recognize that and accept it.”  My sons have a gay dad.  We should not feel like we have to hide that fact from the other kids in their kindergarten class.  Do those kids need to have sex education?  Of course not.  They seemed to get the concept of Cinderella and the Prince being heterosexual without knowing what happened on THEIR wedding night.  Our children should not be silenced as to the make up of their family.

5. Our families may not move.   Marriage inequality puts us under house arrest by state.  Heterosexuals can move from Boston to Salt Lake City without a single after thought.  Gay families have to research the legalities, protections and vulnerabilities.  We are not free.

4. We are not protected to die with dignity.   The Westboro Baptist Church has declared war on gay funerals, and have for almost two decades.  In the big picture,  this has actually helped awareness of how awful the hate community is towards gay people.  Their atrocious behavior towards the dignity of gay people was not getting enough attention however, so they changed strategy and went after fallen military heroes.  The attention worked and now there is legislation in the works to prevent protests at military funerals.  That is good.  Those events deserve dignity and protection.   So do gay people who have passed away.   Where is our funeral dignity protections?

3.  We are denied our religious freedom.  Marriage has been denied gay people for one reason only:  major religions are against it.  Period.  There are many that are NOT against it, however,  and those religions are ignored and gutted of power.  Those who enjoy religious freedom in this country are those who are in religions with money.  Our spiritual and religious beliefs should be allowed to run our lives freely and without hindrance from another person’s religion—no matter how well funded that other religion may be.

2.  Our lives are allowed to be characterized as a violations of others “religious freedom”.   Speaking of religious freedom…  when has another group in recent history been allowed to be characterized as a threat to religious freedom?  There are religions who believe women to be inferior, but they are not permitted to strip away gender hiring protections.  We are people.  We are not violations of anything.  The fact that anyone entertains that notion for even a moment is horrendous.  Gay people’s rights are NOT “values issues”, they are “civil liberty issues” and deserve to be regarded as such.

And to me… the most basic, most obvious violation of decency in regard to gay people is this: