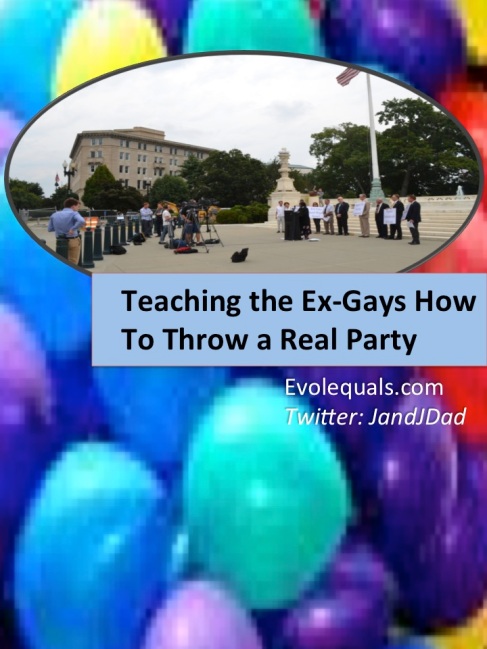 This is a tale of two parties. Like the Dickens book, one personified the best of times, and one . . . well, one was a disaster without historic precedent. No, it was not the French Revolution, it was the big “Ex-gay Lobby Day,” which was being held 3,000 miles away from the other big event of the week, my son Jason’s “I am 11” birthday party.

The organizers of the “Ex-gay Lobby Day” had promised that their event would be attended by “thousands.” We were shooting for no more than 20 at the bounce-house party venue with whom we contracted. The “ex-gay” event pulled in about 10 people, and ours is on its way to a whopping 30.

How is it that we were so successful in triple-lapping them?

One of our family practices is to sit down after we throw a party and debrief. I guess I get that from my years in the corporate world. We figure out what went wrong, what went right, what we want to do again, and what we definitely do not want to repeat.

Since the poor ex-gays were mind-numbingly humiliated beyond all possible belief on a very public epic fail, my sons and I decided to sit down and write them a letter with some helpful suggestions.

I need to emphasize that this exercise was in no way an excuse to gloat (okay, well, for me, it might have been . . . a little . . .), my sons earnestly tried to come up with ways to help this pathetically abandoned group of strangers. Here is our family note of condolence and helpful hints:

We are sorry you had a bad time the other day. We cannot really imagine how embarrassing that was. We invited 50 people to our party on Sunday and if only 10 of them show up, well, we would be a little sad. If we had invited thousands and only 10 showed up, well, we would be really really sad. We don’t like it when people are sad [even if their motives were basically horrible. Dad edit].

We don’t want to pretend we know better, but here are ideas we used that are making our party great, and we thought you might like to use them for next time. [Please, don’t feel there needs to be a “next time.” Dad edit.]

Anyway. We are sorry you were disappointed that your event went so badly. [Not really. Dad edit.] We have an idea. Why don’t you gather up the 10 people who did show up and fly them out to California to join us at our bounce house party? They will all have fun, and they will like you more. You can see what a real gay family is, and how much we love one another. You can see that our having rights won’t be anything bad for you.

You will also see that all we really have to fear is homophobia, and that if homophobia did not exist, everyone would be just fine. And people might even come to your parties.