It IS the Small Stuff 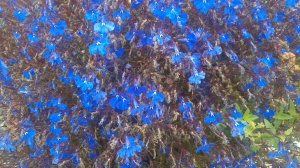 Richard Carlson wrote a book called “Don’t Sweat the Small Stuff…and it’s All Small Stuff”.  Those can be cute words to live by for humans trying to get by in this thing called life with an iota of sanity at the end.  Unfortunately, for those denied equal rights from their fellows… those words seem hollow and untrue.  The small details of what other people enjoy…. hell, not even enjoy…take for granted, that when it is denied to you, become painful statements on how little society values you.

Such it is in the discussion of marriage equality and those in love, who are denied… the small stuff.  Certainly, some of the inequality is not small at all.  Numerous gay widowers have suffered the inability to be present for a terminally ill spouse, denied the right to say good bye with dignity, and the stripping of personal possessions and finances at the hands of greedy relatives.

Take the Snyder-Hills.   This is a couple very much in love.  They discovered their deep feelings for each other in a “small” place… a six hour car ride that they say flew by in what seemed to be a matter of minutes.  As their love and relationship blossomed, they had to sweat another “small stuff” in that Steve was in the military and as such, had to… in the words of Mission Impossible…. “disavow all knowledge” of the love of his life.  As he served in Iraq, this small stuff had to lead to intense anxiety since if anything happened to him,  his spouse Joshua, would be literally the last to know.

Steve survived the humiliation of Don’t Ask Don’t Tell, and its repeal, to go on to have the privilege of asking the Republican candidates for President how they would treat the policy if they were elected.  The Republican audience shamefully booed him while the candidates answered the question focusing on gay sex and complete disregard for the kind of relationship that Steve actually had, and has, with Joshua.

Despite the second-class citizenry that the United States had thus far afforded them, Joshua and Steve married in Washington DC.

A year later, one week ago, Steve and Joshua set out to take care of one detail that most married couples have taken care of automatically… the naming of their family.  They had decided on the surname of “Snyder-Hill”.  The problem… a “small stuff”…. was that in Ohio, a heinous second class citizenry law is in place to not recognize same sex marriage.  While that fact is bad enough, it also complicated the effort to enact as simple a situation as requesting name changes.

Steve and Joshua were told that if they made up any other reason to get a name change…it would be granted.  Right away.  As if it was…”small stuff”.  But if they told the truth. that the name change was to reflect that they were married, its approval was not only in question, it was likely to be denied.

They did not lie.   Not such “small stuff” when you honor your relationship, your marriage and your love.

So, now, unlike any other married couple in Ohio.  They wait.  A notice with the fate of their family name will be unceremoniously mailed to them.  Joshua aired his frustration on his personal Facebook page, ” I honestly wish none of this happened. It was suppose to just ba a simple name change”.

Finally, the notice came.  It was approved.  A family got relief that they could actually call themselves the name they knew them to be.  Weeks and tension over something other families find out in seconds.

When people ask why marriage equality is important, they get told the big things.  The big stories of horrific treatments of people in the wrong place at the wrong time.   Those sometimes impress, but often they do not… they aren’t likely to happen to many couples.   But when they are made aware of the “small stuff” for every couple, the little individual indignities that gay spouses endure, the reaction is a recommendation to “not sweat it”.  These indignities add up however, in a way that no heterosexual couple will ever have to endure.  It is the culmination of the “small stuff” that heterosexuals need to take seriously.  If the erosion of basic American equality disintegrates then there will be little for soldiers like Steve to fight for… the war will have been lost already, at home.

In the case of equality… it is the “small stuff”, or “little things” as Henri Frederic Amiel calls them , and it matters.  “What we call little things are merely the causes of great things; they are the beginning, the embryo, and it is the point of departure which, generally speaking, decides the whole future of an existence. One single black speck may be the beginning of a gangrene, of a storm, of a revolution.”  Henri Frederic Amiel

3 Responses to It IS the Small Stuff