When a Homophobic Cousin Attacked a Woman’s Marriage, He Helped Her Understand What True “Family” Means 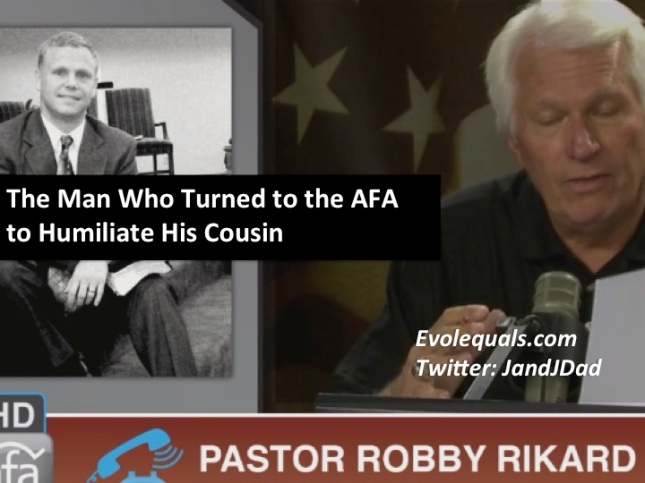 Once upon a time there were two cousins, Jessica and Robby. They grew up together in the warm and wet Mississippi back lands. They swam, they fished and Jessica loved and respected her cousin. He gave her the sense of understanding family and loyalty.

That sense of family and loyalty was upended completely recently when Robby recently ran to the American Family Association, an entity defined by the Southern Poverty Law Center as a “hate” organization, to get their help in humiliating and attacking Jessica’s marriage. Robby has never met Jessica’s husband.

Jessica and her husband, Nick, are legally married. Nick is a transgender male. A mutual friend introduced them a few years ago. Jessica states, “Nick has been my best friend since day one. We can always count on the other one during the hardest times in life. While he was in paramedic school, Nick felt my full encouragement through the whole way and I never gave up on his dream with him.  We stand by each other through every thing just as a husband and wife should. I know at the end of the day I can count on him and that’s what real romance looks like. Our love is the kind some people only dream about and I’m very lucky to be able to say I found that in this life with him.”

On the afternoon of September 23rd, Jessica got a private message from her cousin Robby out of the blue. It said “Jessica, I want you to know that I love you both as a person and as my family. You hand I practically grew up together, and I don’t want you to think that I am angry with you. But I have to tell you that what you and Nick are doing is wrong, and I am going to be doing all that I can to challenge it. I realize this might upset you, but I have to do what is right as difficult as it is going to be.” Jessica had no idea what he meant about “challenging it”, but she was soon to find out.

That evening, Robby posted this to his Facebook wall: “Last week I learned of a same sex marriage that took place right here in the state of Mississippi. Two females, one of which is a family member of mine, applied for and was granted an official marriage license in Desoto county. One of the partners poses as a man and managed to obtain a driver’s license that legally identified her as a male. I would like to urge all Mississippians who are outraged to join me. This is a battle that has come to us and we cannot afford to lose traditional marriage”. Then he then gave the phone numbers of the attorney general, lieutenant governor and the governor.

Around midnight, Jessica received another private message from a woman she had never met. “You need to see this video,” the message said. The video was her cousin Robby on a show with the AFA’s Bryan Fisher. Bryan Fisher is infamous for homophobic statements that include the encouragement of the kidnapping of children from LGBT families. They were making public Jessica and Nick’s names, implying that they were criminals, that their marriage was a fraud scheme and stating out and out lies as fact. The video is here .

“The video makes it seem like we did all of this to pull one over on the state of Mississippi, and that’s nowhere close to the truth.” Jessica told me. “Mine is not an illegal marriage in any state, because it is not a same sex union at all. That is not legal in this state, and there is no “loop hole” for that to be possible. Nick actually transitioned from female to male, and had his name and gender legally changed complete with birth certificate, social security card, drivers license, and all medical licenses. After all of that was completed we were able to apply for our marriage license and got married, the same as any other opposite gender couple.” Bryan Fisher characterizes Jessica and Nick as two lesbians, one of which had a hormone shot, and then fraudulently had records changed.

Nick’s process to his correct gender started before 2010. He had undergone full psychiatric exams in preparation. In 2010 he started a permanent hormone therapy program and had physiological operations in support of his transition.

Nick works as a paramedic saving lives and he has been seen as a true hero in his community. The AFA’s intrusion into his private life, and their dishonest portrayal has now caused him issues at work. Jessica reports, “While he is out saving strangers lives, we have to worry about the safety of our family and his career. It takes teamwork from his fellow co-workers and since the videos and articles have come out, he has been treated like an outcast.” Many that Nick worked with had only known of him as male, his actual gender. Now feel they have license to judge.

Jessica reached out to the popular Twitter site Stop-Homophobia. “Help us,” she asked, attaching a link to the AFA video. She began hearing from many people who have showered love and support. Those messages helped her deal with her feelings of betrayal and crisis over what family was supposed to be about. “For me when I saw the video I felt it was one of the worst betrayals ever, to find out that someone made us out so horribly, and on top of it for it to come from a family member. The feelings we felt over this outrage, words can’t describe. We are being vilified for the same loving and commitment other married Mississippi couples share with each other. Our right to commit to each other for the rest of time is being portrayed as everything it’s not. The video want to portray us as deceivers who did all of this to pull one over on the state of Mississippi, and that’s nowhere close to the truth. The truth is our marriage is built out of the love we have for each other.”

“We are very grateful for the support and love that we have come across through this attempt to humiliate us,” Jessica states. “So much of our family have stepped up and let us know they are open minded and accepting and loving. The members of Nick’s family are powerful defenders of him as a man and a hero. Especially his dad, who has always been his biggest supporter. My family accepts Nick as the person for who he really is, especially my sister and most of them right here in Mississippi.”

This has given Jessica and Nick a new definition to, not the word “marriage”, but the word “family”. Blood cousin Robby is not family. The “American Family Association” is not an association of families; it is an association of those who want to attack families that do not look exactly like a set of limited parameters. Those who see his life saving work but who cannot see Nick as he is, are not family. It is the people who love, support and celebrate him who are the true family, and Jessica and Nick are blessed to have many who have such qualifications in their lives.

“Nick taught me what marriage is,” Jessica commented. “Now someone I grew up with has caused me to re-look at what I thought being family meant. It does not mean blood and telling falsehoods to meet an agenda. It means love and honesty. I stand corrected, and we are now a stronger family as a result.”

Sharing DNA is no big deal. A person’s ability to look deep, push past their own pre-conceived notions to better understand a family member they love, and then stand up for them, that ability brings the greatest value in life. Some will learn they have that ability within themselves and stand proud. Others will make videos.

17 Responses to When a Homophobic Cousin Attacked a Woman’s Marriage, He Helped Her Understand What True “Family” Means